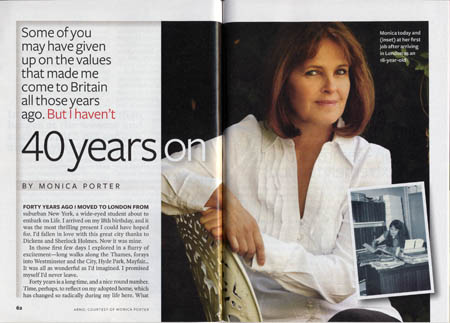 Some of you may have given up on the values that made me come to Britain all those years ago. But I haven’t.

40 Years On by Monica Porter

It was 40 years ago this summer that I moved to London from suburban New York, a wide-eyed drama student about to embark on Life. I arrived on my 18th birthday and it was the most thrilling birthday present I could have hoped for. I had been dreaming about coming to this greatest of all world cities, with which I had fallen in love in childhood through the novels of Dickens and the Sherlock Holmes stories. Now it was mine.

In those first few days I explored the capital in a flurry of excitement – long walks along the Thames, forays into Westminster and the City, Hyde Park, Mayfair…it was all as wonderful as I’d imagined. I promised myself that I would never leave.

Forty years is a very long time and a nice round number. It’s an opportune moment, perhaps, for a personal reflection on my adopted home – the city, country and society which have changed so radically during my life here, and in my view, generally not for the better.

What saddens me most is that we seem to have lost (or to be more accurate, jettisoned) the very Englishness which drew me here in the first place. When I arrived in 1970 London was already fabulously cosmopolitan – you’d meet 30 people at a party and they would be from 15 different countries – which was something I relished. But all this multiculturalism was somehow underpinned by certain traditionally British ideals – tolerance, equality, fairness, plurality. Everyone I met, no matter what their personal background, seemed genuinely to share these values and to regard themselves as fortunate indeed to be living here. It was the common bond between us all.

It strikes me that in today’s Britain ‘common bonds’ are extremely tenuous. Steadily over the past dozen years or so, more and more of our inhabitants (indigenous people as well as newcomers) convey a disdain for the decent, uncomplicated, old-fashioned Englishness which I have always cherished. I refer to the gentle, self-deprecating humour, the stiff upper lip, the sense of duty, the common everyday civilities and common sense which were the essential characteristics of this enlightened island race.

Of course those virtues can still be found in individual people, but who can pretend that they still mark us as a society? It seems we’ve reached a tipping point and there are now too many people in Britain who are either uncommitted to our national principles or blatantly hostile to them and too many who (either cowed or brainwashed by political correctness) refuse to do anything about it. Whatever happened to the indomitable Great Britain of Winston Churchill?

Even during the Margaret Thatcher era no one could have imagined that one day the very term ‘English’ would suffer such abuse. In today’s Britain you can wear any ethnic or cultural identity with pride – except for Englishness. That, we are made to feel, is tantamount to racial elitism and carries sinister undertones of Victorian colonialism. This prejudice makes me angrier than anything else, despite the fact that I’m not English…or maybe, even because of it. After all, I didn’t embrace this culture just to see it trashed by those who are too stupid to appreciate it. Living here by choice, rather than by chance, has somehow made me a more passionate defender of Englishness than the English themselves.

Another disappointment for me in recent years has been the transformation of that most treasured British institution, the BBC. I still remember what a joy it was in my early decades here after living in the U.S., where television and radio are so dire, to watch the advertisement-free zone of the BBC and listen to the uncompromisingly intelligent programmes on Radio Four.

Admittedly, Radio Four is still extremely good. But what’s been going on with the rest of our beloved Aunty? Far from being about public service, as it once was, it’s now just another bloated, greedy, empire-building corporation – with the difference that it seems unaccountable to its owners, i.e. us, the licence-fee payers. It’s self-indulgent and extravagant (think Jonathan Ross) and more concerned with competing against commercial rivals than with upholding standards and providing value for money. It appears to have lost its way – an apt metaphor, perhaps, for the country as a whole.

As for the great metropolis I first encountered four decades ago, it’s grown much more hard-boiled. It used to have a friendlier, less cynical atmosphere. People used to trust each other more (I guess trust went permanently out the window after the 7/7 atrocities). And just getting around can be onerous – the Tube is expensive and unpredictable, but if you drive a car you’ll turn into a paranoiac, because the heartless traffic wardens and ubiquitous cameras really are out to get you.

There was an endearing quirkiness about London which has been all but wiped out by its gradual Americanisation over the past 20 years. It didn’t used to look or feel like any other place. Now it’s just as full of McDonalds and Starbucks and vast anonymous office blocks as any other city, and following widespread redevelopment, great chunks of it could pass for Houston, Chicago or Los Angeles. It’s not only more aggressively commercial, but more samey.

Call me nostalgic if you will, but I don’t think I’m wearing rose-tinted glasses. I haven’t forgotten the downside to the Seventies and Eighties – the strikes, riots and economic woes – and I realise that the regeneration of our cities was necessary and that globalisation has brought some real improvements. (The food is a lot better, for a start. Remember the Wimpey Bars?)

I kept the promise I made to myself as a teenager 40 years ago – I stayed. And in 2004, finally, I became a British citizen. It was a statement of future intent. I have put down roots here and, come what may, I won’t be bailing out.

But change, I think, is in the air. A growing number of columnists, social commentators and political pundits are echoing my views. It always takes a long time for things to get moving in this country, but – and especially with a new-style Government out to break the mould – we may be at a turning point.

We’ve no reason to be ashamed of our history or our civilisation. Let’s proclaim with pride what we’re about. Those who can’t handle that are free to make their way to the exit.