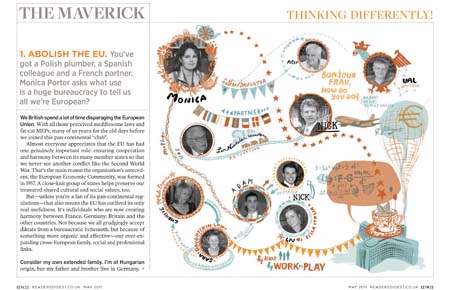 We Brits spend a lot of our time disparaging that contentious organisation, the European Union. With its meddlesome laws and regulations, fat-cat MEPs and waste of taxpayers’ money, it’s easy to see why some of us wish back the old days before we joined this European ‘club’, Its aim was to create more harmony amongst its member states, but at times it seems rather to stir up the old animosities between them.

And yet we all appreciate the need for a strong and united Europe, composed of countries which work with, rather than against, each other. Not just to pre-empt the risk of there ever being another European war, but to preserve our treasured pan-continental cultural and social values, so often nowadays under attack from their detractors.

So, here is the good news. Whether you love it or hate it, ultimately the EU is irrelevant to the future unity of Europe, because we are already gradually dissolving the boundaries between our countries through our personal ties and bonds. And this is a more organic and more effective means of fusion than the grudging adoption of diktats from an artificially created bureaucratic behemoth.

To illustrate what I mean, consider my own extended family. I am of Hungarian origin, and still have close contacts in Hungary, but my father and brother live in Germany. My two sons have Polish blood from their father’s side and my daughter-in-law has a step-mother in Spain through her father, who settled there many years ago. My younger son’s partner lived for years in Italy, has close friends there and is as fluent in Italian as in her native English (while an earlier, half-Norwegian girlfriend took him to Oslo to visit her father).

My own partner, Nick, has a father who is English-born but comes from German stock, and his mother was Danish, so he has cousins in Denmark. Nick’s sister spends part of each year in France, where she owns a second home and has close native friends, and her son lives in Prague as a result of his grandfather’s ties to that city, which date back to the 1930s.

A web of intricate, interwoven strands within a single family network, extending both East and West, into ‘New’ and ‘Old’ Europe. But the most remarkable thing about all this is how essentially unremarkable it is. Far from being exceptional, mine is the epitome of the New British Family. This 21st century phenomenon is rapidly becoming as normal as the traditional, mono-cultural family unit of earlier times.

Of course, not everyone has European family members, particularly those who are outside London. But even if you aren’t related to one, most Brits now have regular contact with Europeans in a way they never did back in the post-war era. Whether you take your holidays in Spain, or have used a Polish builder, have a French colleague at your workplace, or even if you just support a German in your local football team, we’ve all become far more inter-dependent.

And it’s not an urban vs. rural thing. That great British institution, the radio soap opera The Archers, is a barometer of life in the shires. I remember being delighted when, over the past few years, it introduced some exotic Magyar elements. First there was the character of Chaba, a Hungarian agricultural student who becomes a temporary Ambridge resident. And now Archers stalwart Debbie Aldridge actually lives in Hungary, where she runs a farm. Nobody, either in The Archers or in the real world, considers any of this the least bit remarkable.

We have begun to see ourselves as European, not because we belong to a political and economic superstructure called the EU, but because of our personal bonds – familial, social or professional – with the citizens of the different states of Europe.

A Brit with a grandfather in Germany, cousins in Poland, a step-mother in Spain or close friends in Italy, will not only know and understand more about that other country, but will care about it more, too. This is simply human nature. We can’t deal in nations, societies, or even governments. We can deal only in the single unit of human existence, the individual person. That is what touches us and colours our thoughts and emotions.

I remember being taught at school how important it was to behave decently to people from foreign lands, because we were all ‘ambassadors’ for our own countries. It was one of those ‘teacher’s dictums’ which meant little to me until translated into personal experience. For instance, along with a lot of people, I had a view of Parisians as arrogant xenophobes until the day I was driving through Paris and got hopelessly lost trying to find the Eiffel Tower. I expected to get short shrift from the young man in the car next to mine at a traffic light, from whom I hurriedly begged directions – in English. Instead, he told me to follow him, and led the way for 20 minutes through the tangled traffic until the Tower loomed ahead…even though he’d clearly been on his way to somewhere else. That was fifteen years ago and since then, even though we like to cling to old stereotypes, I haven’t been able to label the Parisians as arrogant or xenophobic.

But if a fleeting connection with a stranger can affect our feelings towards another nationality, doesn’t it happen even more profoundly with our intimate contacts? If we are closely linked to someone in another country, we are linked to that country, as well. It becomes a part of ourselves. And we are less likely to dismiss it or reduce it to a stereotype, because however tangentially, what happens there makes a difference to our own lives.

The ‘Europeanisation’ of domestic relationships in Britain has been hastened by the growing number of reconstituted families. Our young people are now likely to have step-parents as well as parents, and step-grandparents, and half-siblings or step-siblings as well as the full-blown variety, while the middle-aged acquire another set of in-laws and a flock of new extended family members through a second marriage. The chances of finding ourselves with unexpected family connections abroad have never been greater.

I know many British families with a continental element. My neighbour Marion’s set-up is not unusual. A businesswoman in her sixties, she used to refer to the Spanish – if she mentioned them at all – as a race of surly waiters, dodgy workmen and bloodthirsty bullfight aficionados. But two years ago her son married a pretty young Spanish woman, a colleague of his at an international bank in the City of London. The wedding took place in Barcelona, where Marion met her son’s new in-laws and local Spanish friends. His life is now inextricably bound up with these people, and she hasn’t found a surly waiter or dodgy workman amongst them. (Not sure about the bullfighting.) Now Marion is longing for her first (half-Spanish) grandchild. She has even remarked that she hopes for a little girl who is as ‘adorable’ as her clever, accomplished daughter-in-law. What a difference a new family member can make.

My journalist chum John, born and bred in London’s East End, acquired a ‘French connection’ a few years ago, when his daughter married a man from Lyon. ‘They’re a very old family,’ he explained, ‘and a little snooty. But I’m working on them.’ Now he and that old French family have a grandchild in common – what bond could be greater?

Another friend, thirty-something Tony, finally found the love of his life – a Latvian girl. Tony is a professional chef from Hull, and when he returned from his first visit to her folks in Riga (a city he’d never even heard of before), he was full of vivid impressions. ‘Do you know, they put dill into everything. Incredible.’

A historian acquaintance, the most pukka Englishman imaginable, who grew up in Gloucestershire, now spends every summer on the Mediterranean island of Cephalonia, where his Greek third wife owns a home.

Then there is my GP, a suave man-about-town in his fifties who has so far evaded marriage. But his current girlfriend is a French doctor, a divorcee with two teenaged children, and he now spends most weekends with them at their Paris apartment. ‘Her kids are typically surly and mistrustful,’ he tells me, ‘so those visits aren’t easy. But I have to go. I guess it must be love…’

Even my hairdresser, a Londoner of Italian parentage, has married a Greek lady with a French-Austrian family background on her maternal side. And he admits he can find the mix a bit confusing.

So the Brussels big-wigs might rule on how many hours we work and whether our prisoners can vote, they might issue edicts on the shape of our bananas and tell us how to make our cheese. They can dictate to us in virtually every area of our lives, major and minor.

But the EU will never have the power to make the citizens of one European nation feel connected to those of another, it can never make us feel involved in each other’s welfare and care about each other’s fate. Those things can be born only out of the network of innumerable personal connections between our different peoples: families, friends, colleagues, associates. Taken altogether they can and will, in time, put the ‘union’ into the European Union.