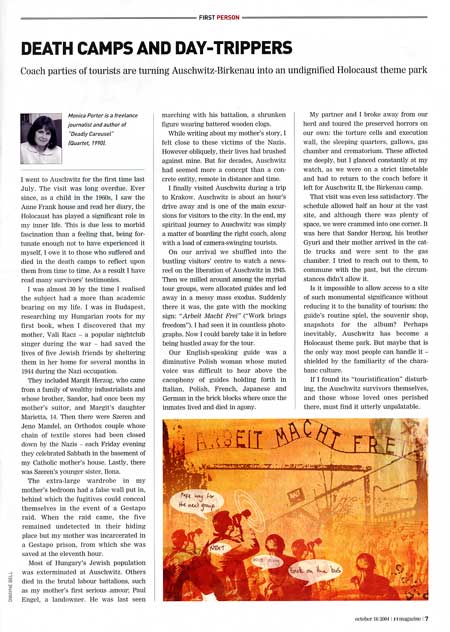 I went to Auschwitz for the first time last July. The visit was long overdue. Ever since, as a child in the Sixties, I saw the Anne Frank house and read her diary, the Holocaust has played a not insignificant role in my inner life. This is due less to morbid fascination than a feeling that, being fortunate enough not to have experienced it myself, I owe it to those who suffered and died in the death camps to reflect upon them from time to time. So I have read many survivors’ testimonies.

I was almost thirty by the time I realised that the subject had a more than purely academic bearing on my life. I was staying in Budapest, researching my Hungarian roots for my first book, when I discovered that my mother – a popular nightclub singer in Budapest during the war years – had saved the lives of five Jewish friends by secretly sheltering them in her home for several months during the Nazi occupation in 1944.

They included Margit Herzog, who came from a family of wealthy industrialists and whose kind-hearted brother Sandor had once been my mother’s suitor, and Margit’s 14-year-old daughter Marietta. Then there were Szeren and Jeno Mandel, an Orthodox couple whose flourishing chain of textile stores had been closed down by the Nazis – each Friday evening the Mandels lit candles and celebrated Sabbath in the basement of my Catholic mother’s house. Lastly, there was Szeren’s younger sister, Ilona.

The extra-large wardrobe in my mother’s bedroom had a false wall put in, behind which the fugitives could conceal themselves in the event of a Gestapo raid. When Margit’s reckless husband – who had assumed a false identity – inadvertently gave the game away, the raid duly took place. The five remained undetected in their hiding place, but my mother was incarcerated in the notorious Gestapo prison in the Buda hills. She was saved at the eleventh hour by her resourceful mentor Paul Barabas, a film director working for the Resistance…

Most of Hungary’s Jewish population was exterminated at Auschwitz. Others died in the brutal labour battalions, like my mother’s first serious amour, Paul Engel. In the Thirties the romantic landowner had swept her away to Monte Carlo, and taught her about fine wines and French poetry. He was last seen during the war, a shrunken figure marching with his battalion, wearing ragged trousers and battered wooden clogs.

While writing my book on my mother’s wartime story, I felt close to these victims of the Nazi death machine, who had in turn been close to her. However obliquely, their lives had brushed against mine. But for decades, ‘Auschwitz’ had been for me more a concept than a concrete entity, remote in distance and time, no longer of this world.

So the very idea of going to the site, standing on its soil and seeing the infamous forbidding entrance, the barracks and barbed wire, was at first too surreal for me to grasp. The opportunity arose during a weekend break to Krakow. Auschwitz is about an hour’s drive away, and billed as one of the two main excursion destinations for visitors to the city (the other is the Wieliczka salt mine). In the end, my spiritual journey to Auschwitz was simply a matter of boarding the right air-conditioned coach, along with a load of camera-swinging tourists and an impassive guide with a limited capacity for unplanned conversational English.

On arrival we shuffled into the bustling visitors’ centre, to be shown a newsreel on the liberation of Auschwitz made by the Soviet Army film unit in 1945. Then we milled around amongst the myriad tour groups, and discovered that the Auschwitz guides were different to the on-coach guides. Haphazardly divided into sub-groups, we were led away in a messy mass exodus towards the camp entrance. Suddenly there it was, the gate with the mocking sign: Arbeit Macht Frei. I had seen it on countless old photos. Now I could barely take it in before being hustled away for the tour.

Our English-speaking guide was a diminutive Polish woman whose muted voice was difficult to hear above the general cacophony of guides holding forth in Italian, Polish, French, Japanese and German. From her deadpan expression it was impossible to gauge what she was saying about the camp’s history as we jostled with the crowds in the brick blocks where once the inmates lived and died in agony, now housing an extensive exhibition. To make matters worse, although children under 12 are officially not admitted, there were a number of lively youngsters there, even a crying toddler or two. In practice, it seems, they don’t turn any punters away.

My partner and I broke away from our herd and toured the camp’s preserved horrors on our own: the torture cells and execution wall, the claustrophobic squalor of the sleeping quarters, the gallows, gas chamber and crematorium. These affected me deeply, but I glanced constantly at my watch, as we were on a strict timetable and had to return to the coach before it left for Auschwitz II, the Birkenau camp.

That visit was even less satisfactory. The schedule allowed for a mere half-hour at the vast site, and although there was plenty of space for everyone, we were crammed into one corner. It was here, as my mother learned after the war, that Sandor Herzog, his brother Gyuri and their spirited, widowed mother arrived in the crowded cattle trucks and were dispatched to the gas chamber. I tried to reach out to them, to commune with the past, but under the circumstances I couldn’t.

Is it impossible to allow access to a site of such monumental historic significance without reducing it to the banality of tourism: the guide’s routine spiel, the souvenir shop, snapshots for the album? Perhaps inevitably, Auschwitz has become a Holocaust theme park. But maybe that’s the only way most people can handle it – shielded by the familiarity of the charabanc culture.

But if I found its ‘touristification’ disturbing, the Auschwitz survivors themselves, and those whose loved ones perished there, must find it utterly unpalatable.

This, however, is a problem with a built-in time limit.