Turning Points in the Early Lives of Famous People 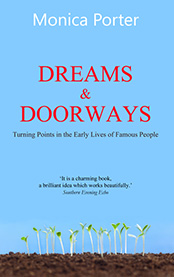 In Dreams and Doorways Monica Porter talks to 26 famously successful people and asks them about the formative influences in their early lives.

The Daily Mail chose it as its junior book of the week on March 13, 1993. This is what the paper said about it:

If you’re already planning to be rich and famous, this collection of interviews could give you some tips on how to succeed. The good news is that you don’t have to come from a wonderful family or be brilliant at school. In fact, it is striking how many of the famous people interviewed for this book felt like miserable misfits in their early years.

Fatima Whitbread, for example, was brought up in a series of unpleasant children’s homes after being abandoned as a baby (she screamed for three days in an empty flat before she was found). Furious and miserable at home and school, she threw all her energy into sport and emerged as a world champion javelin thrower.

Many others found that their greatest strengths were forged out of what we would consider bad luck. Jockey Peter Scudamore spent all his time riding in order to get away from his nanny, who was scared of horses.

London’s Mayor Ken Livingstone had to sharpen his wits because he was always small, ‘the weediest and runtiest kid in school’. Actress Susan Hampshire and to develop her dramatic talents to distract her classmates from her crippling dyslexia.

The stories are so different from each other that one is left with the cheerful conclusion that whatever your circumstances – privileged or poverty stricken, pampered or neglected – nothing can hold you back from what you really want.

‘It is a charming book, a brilliant idea which works beautifully.’
Southern Evening Echo

Originally published by Pan Macmillan in 1993 and re-issued by Thistle Publishing in 2014. Available on Amazon as an e-book and paperback.

Buy the book on Amazon! 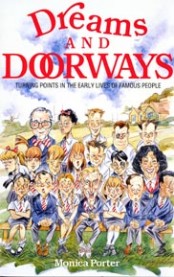