The Story of the Newspaper Column That Started the Reunion Industry 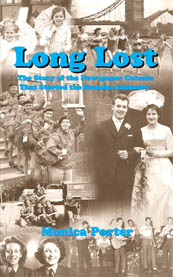 Monica Porter’s weekly Missing and Found column has been running in the Daily Mail since June 1999, featuring the tales of people who are searching for their long lost friends and family members. Schoolmates and childhood pals, wartime comrades and evacuees, birth parents and estranged siblings, former colleagues, old flames, fellow members of Swinging Sixties pop groups and of scout troops. All of life is there – the light-hearted and the poignant, and often the strikingly evocative. Over the years the column has reunited many hundreds of people. And it was ahead of its time, a forerunner to ventures such as the Friends Reunited website (launched in 2000).

Today there are many internet sites, as well as print outlets, which aim to bring the ‘long lost’ back together. But Missing and Found has a quality which makes it especially appealing to its readers: many of its stories tap into our national social and cultural memory, they are concerned not only with the individuals named in them, but with our common past. This, perhaps, is the underlying reason for its popularity.

As well as reprising a selection of the column’s most colourful reunion tales, Long Lost tells the story behind the groundbreaking newspaper column – how it was inspired by the experience of an ordinary couple from the provinces, Gill and John Whitley, who traced John’s mother after 34 years. The emotional reunion changed their lives and led them to set up a voluntary service helping others achieve the same. They became the column’s behind-the-scenes ‘people finders’.

In Long Lost Gill Whitley tells the author how her tracing methods have evolved, with electronic databases and online resources largely replacing old-fashioned ‘detective work’. She provides an easy guide on how to find a person yourself, as well as valuable advice on when it is wiser not to search for someone. Missing and Found stemmed from an idea proposed by no less than Sir David English himself, while Editor-in-Chief of Associated Newspapers. Which makes the column – and now this book – one of the illustrious Fleet Street editor’s enduring legacies.

Since 1999 Monica Porter’s Daily Mail column, Missing and Found, has been reuniting friends and relatives from all over the world…Long Lost recounts how a couple’s achievement in tracing the husband’s mother gave birth to a regular feature that has become one of journalism’s most enduring successes.