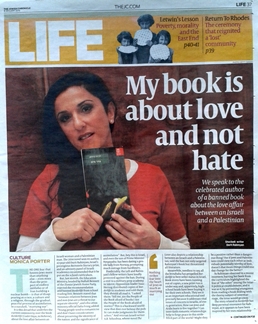 The one fear that haunts Jews more than anything else –even  more than the prospect of endless intifadas or of Iran building a nuclear bomb – is of disappearing as a race, a culture and a religion, through the gradual, peaceful process of assimilation. In a nutshell, ‘marrying out’. It is this dread which underlies the current controversy over the book Borderlife (Gader Haya, in Hebrew), about the love affair between an Israeli woman and a Palestinian man.

The 2014 novel won its author, 43-year-old Dorit Rabinyan, Israel’s prestigious Bernstein literary prize, and an advisory panel of Israeli academics recommended that it be put on the school curriculum. But last month the Education Ministry, headed by Naftali Bennett of the Zionist Jewish Home Party, rejected the recommendation and banned Borderlife from school reading lists. Bennett stated that ‘intimate relations between Jews and non-Jews are a threat to our separate identity’, and education ministry official Dalia Fenig added: ‘Young people tend to romanticize and don’t have considerations about preserving the identity of the nation and the significance of assimilation’. (But hey, this is Israel, and even the son of Prime Minister Netanyahu  has been dating a gentile lady from Norway, to much outrage from hardliners.)

Predictably, the Left and Rabinyan’s fellow writers have loudly protested against the ban. During a visit to a military prep academy in Sderot, Opposition leader Isaac Herzog distributed copies of Borderlife to students and told them they should all read it.‘I asked them: “Tell me, are the People of the Book afraid of books? Are the People of the Book afraid of stories?” This is a backward worldview that does not believe the public can make judgements for themselves.’ And veteran Israeli writer A.B. Yehoshua, whose novel The Lover also depicts a relationship between an Israeli and a Palestinian, said the ban not only targeted Rabinyan’s book but threatened all literature.

Meanwhile, needless to say, all the brouhaha has propelled Borderlife to bestseller status in Israel. Bookstores have been running out of copies, a new print run is underway, and apparently high school principals have been buying it for their own schools. They see it as an important educational tool precisely because it addresses vital issues of concern to Israelis, of every generation. How can Jews and Arabs learn to live together? Can inter-faith romantic relationships help to forge peace in this strife-filled part of the world? Might they be a positive rather than a dangerous thing? For if Jews and Palestinians could view each other as individuals potentially worthy of love, doesn’t that mean things could one day change for the better?

As Rabinyan observed in a recent interview, barring her book from the curriculum highlighted the fear of ‘the other’ amongst the Israeli political establishment, and it was as if, by preventing youngsters from reading a book dealing with the thorny subject of intermarriage, the issue would go away.

The story related in Borderlife has deep personal resonance for Rabinyan, as it appears to have been inspired by her own relationship in 2002-2003 with expat Palestinian artist Hassan Hourani, whom she met during a sojourn in New York. She was from Tel Aviv, he from the West Bank, but over the few months they knew each other on the neutral territory of New York, they developed a close friendship. While on a return visit home in the summer of 2003, Hassan drowned in the sea off Jaffa.

She wrote him a heartfelt eulogy after his death, in which she reflected on their uncommon relationship. Their conversations about the Jewish-Palestinian conflict could result in arguments, but each forced the other to see the world through their eyes, and for Rabinyan the experience was clearly unforgettable. He was an optimist who believed that a harmonious peace could be achieved in ‘a binational state, common to both peoples…Equal, free, without borders. For you it was exciting, the expression of a wish, for me it was a prophecy of doom that made me tremble.’ Because, as she explains: ‘I do not want my nation to go on being an occupier, but neither do I want it to become a minority.’ She does not make clear whether their attachment was romantic.

Rabinyan claims her novel is pure fiction, but the parallels with real life suggest otherwise. The book tells the story of the love affair between Liat, an Israeli translator in New York, and Hilmi, an expat Palestinian artist from the West Bank. It chronicles the repercussions of their complex, emotionally charged liaison and ends with Hilmi’s death in a drowning accident, like the one that ended Hourani’s life.

But the point isn’t whether or not the book is autobiographical. The point is that it was written and should be read, and what’s more, it should be taught in schools. Because stories like this need to be told if the two sides are ever to settle their differences and Israeli children need to absorb that message…as do Palestinian children.

According to Israeli law, couples can only marry in a religious court and only to partners of the same faith, so mixed-faith couples must marry abroad. Israel recognises civil marriages, even mixed-faith ones, as long as they took place elsewhere. For a democracy which values civil rights, it’s a convoluted take on the institution of marriage. Naturally, the intention is to discourage intermarriage, perceived as the route to Judaism’s slow dissolution.

The couple in Borderlife don’t get married. The mere fact of their intimacy is deemed threat enough to Jewish long-term survival, in the eyes of more uncompromising Jews. In a less dogmatic way, perhaps, the same anxiety over intermarriage exists here in the UK. Some 300,000 Jews in a population of 65 million, with nothing to stop anyone marrying out, should they so wish. An understandable anxiety, you might think. But in a free country you can’t legislate in the realm of love and personal relationships, even in the face of existential concerns. All you can do is set out the attractions of remaining within the fold, and hope for the best. In any case, after five (highly challenging) millennia, the Jewish faith doesn’t look like disappearing anytime soon, so perhaps there is no call for doomsaying.

Indeed, when she spoke to me by phone this week from her home in Tel Aviv, Rabinyan said the story told in Borderlife was ultimately optimistic, because it showed how, through the power of love, two people from opposite sides of the divide could ‘drift into each other’s souls’. They could form an intimacy which didn’t threaten their own identities as Jew or Arab, ‘but allowed each to see the other person in detail, as whole human beings with their complexities and ambivalences’.  The book’s New York setting made it possible.  On the home turf of the Middle East, she said, two people such as Liat and Hilmi wouldn’t have the chance to achieve their symbiosis. ‘We don’t see our neighbours, so we demonise them.’

She said she didn’t write books that had ‘messages’ and Borderlife had no agenda. She wanted the story to be seen simply as literature. ‘But if young Israelis can get some comfort from seeing their realities reflected in it, if they are moved by the characters’ emotional journey  and made to think twice about their own prejudices, that’s good enough for me.’

As the new year gets under way, there is a sign that Borderlife may yet be taught in Israeli classrooms.  Attorney General Yehuda Weinstein is set to investigate the banning decision, following a letter he received fromlawyer Tal Hassin of the Association for Civil Rights in Israel. Hassin asserted that the book’s disqualification ‘sent a chilling message to teachers not to dare deal with conflictual issues in class and to authors not to address controversial issues in their works if they want to get onto the Education Ministry’s approved reading lists’.

Book-banning doesn’t do much for Israel’s image. And with the current wave of violence reaching new heights over the past three months (the death toll stands at 21 Israelis and 131 Palestinians), the country is in the global spotlight. If no other reason than the bad PR it generates, my bet is that Borderlife will, before long, make its appearance in the classrooms, and Rabinyan’s prose will get the full scholastic treatment.

She isn’t bothered either way. ‘I have been shaken by this whole experience,’ she admitted, a little sadly. ‘I just want to go back to my quiet life.’