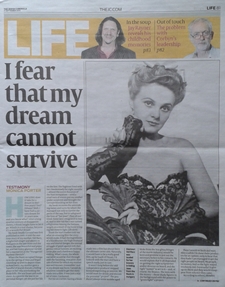 Can my dream survive?

How long does it take for a dream to die? Five years? Ten? Fifteen? Well, I have had a certain dream for twenty-five years now, and you know what? After a long quarter-century of disappointments, I think I might have to let it go. Which is a real shame, because it’s a wonderful dream.

My book Deadly Carousel was first published twenty-five years ago, in 1990. It told the wartime story of my mother Vali Racz, a nightclub singer and actress in Budapest in the late 1930s and the 1940s. She was beautiful and popular, and her sultry glamour earned her a reputation as the ‘Hungarian Marlene Dietrich’.

When the Nazis occupied Hungary in the spring of 1944 and began rounding up the Jews in order to deport them to Auschwitz, my mother gave a handful of Jewish friends a hiding place in her villa overlooking the Buda hills. She was brave and audacious. As a gentile she was in no personal danger, yet she put her life on the line. The fugitives lived with her clandestinely for eight months – almost the entire duration of the Nazi occupation – until a cruel turn of events put my mother under suspicion and brought the Gestapo knocking on her door.

My book recounts the astonishing twists and turns by which she managed not only to survive the perils of the war, but to safeguard the lives of ‘her Jews’. They all survived. Some later emigrated to Israel. And in 1991 Vali Racz was named a Righteous Among the Nations, largely as a result of my book bringing her story to light. Job done.

From the start readers told me what an amazing film the story would make. I had to agree. It had all the ingredients of a blockbuster: the high drama of war and mortal danger, the eternal struggle of good against evil, dangerous sexual liaisons, an exciting, tense plot and a hard-won happy ending. What’s more, the whole narrative would be shot through with the haunting, evocative chansons d’amour for which my mother was well-known. Irresistible! And so my dream was born. I would do whatever I could to get this story made into a film. It was just a matter of time, I reckoned.

For me as a writer, having a book made into a film has always been the ultimate career aim – the holy grail. Naturally, it would have to be a really good film, up for loads of Oscars. I’d hobnob with the stars and have a speech ready, just in case.

It wasn’t long before the odd independent producer stepped forward expressing an interest. We would meet for drinks and discuss the potential ‘project’. The producer (always some middle-aged bloke from the less glitzy fringes of the movie industry) would be keen and promise to put out the necessary feelers to his contacts. He would explain that it all depended on getting the right scriptwriter and/or director on board, and the right ‘names’ to act in it, and of course the finance. The men with the money – those shady figures in the background with the power to ‘green light’ a project.

Then I would sit back and wait. After a while I’d chase these producers for an update, only to hear that they hadn’t yet managed to get the right people on board. No people, no money. And so the light stayed resolutely red. Eventually I’d give up on them and they would disappear from whence they came.

According to others, showbiz experts supposedly ‘in the know’, it was all about timing. Before Schindler’s List came out in 1993, they told me the world was no longer interested in stories about the Holocaust. It was passé. Then after 1993, they insisted that now the hugely successful Schindler’s List had been made, it was too late for another Holocaust film. I had missed the boat. Of course, subsequent years saw the release of The Pianist, The Counterfeiters, Black Book, Defiance, The Boy in the Striped Pyjamas…

As the famous screenplay writer William Goldman once said about the workings of the motion picture business: ‘Nobody knows anything’.

I attended a number of events at which film-makers congregate to network and discuss projects. I’d chat people up and give away my business cards. None of it led to anything. Once I met a bunch of go-getting Hungarian film people. Hungary has a thriving, sophisticated film industry, even though the production funding generally has to come from elsewhere. You’d think a film about a genuine Hungarian heroine would be right up their street. And indeed they all loved the idea of a film about my mum. But love doesn’t get you far in movies.

At its London premiere years ago I met the talented female director of an excellent Hungarian film about the 1956 Uprising. I gave her a copy of Deadly Carousel. She was charming. ‘I love to read books,’ she enthused, ‘especially historical ones. A book about a beautiful and brave Hungarian woman in wartime – can’t wait to read it!’ But she buggered off back to Budapest and I never heard from her again.

A scriptwriter friend convinced me it would be better to send producers a proper ‘treatment’ of my book, rather than a mere synopsis. A film treatment tells the story, scene by scene, as it would appear on the screen. I paid him to write one for me. He did a first-rate job. From then on I always sent this treatment to potentially interested parties. But still my book wasn’t optioned. Meanwhile, as other writer friends did have books optioned by film companies, I tried not to let my envy show. True, those films didn’t necessarily get made, but unlike them I hadn’t even got to first base yet. The amber light?

My agent isn’t interested in spending time pursuing a film adaptation of Deadly Carousel. He had no involvement in the publication of either of its two editions, and anyway he probably sees it as an ‘old book’ now. So it’s really down to me.

A couple of years ago I had a eureka moment. The ideal bankroller of my film would be a Russian oligarch type, someone who loved movies and had money to burn. Here’s why: at a crucial point in my mother’s story her life is saved by a Red Army colonel with whom she’d had a torrid affair a few months earlier. Now, the wartime Russian army has had a really lousy press, what with all the raping and pillaging they did in the countries they liberated from the Nazis. But here is a shining example of a Russian soldier who is a good guy, a hero no less. And a bit of a stud, to boot. Some Russian moneybags would be sure to go for it!

But how do you make contact with an oligarch? I tried through a journalist acquaintance of mine who’d been based in Moscow and was well-connected there, but like most hacks he was only interested in getting his own shit going.

Maybe if I were more tenacious, more pushy, more obsessive, I’d wheedle my way into those fortified Hollywood offices, I’d bang on doors until they finally opened a crack, I’d go Moscow and sniff around until I found an ‘in’ with a Russkie tycoon. Maybe then I’d get somewhere. Who knows? But sadly, that isn’t the person I am.

So twenty-five years on, with a weary sigh, I might finally consign my big dream to that metaphorical bottom drawer of my desk.

In one of his hit songs from the Seventies, Gilbert O’Sullivan wrote: ‘What’s in a dream? Is it all the things you’d like to have been?’ Well yes, that pretty much sums it up.

Then again…if our dreams are integral to who we are, do we ever really let them go? Can they die completely? There is another quote which comes to my mind, from the late, great playwright Arthur Miller. In talking about the importance of having a goal in life, a purpose, he said: ‘You don’t have to feel you’ve got the tiger by the tail; it’s when you can’t find the tiger that agony begins.’

They sound like wise words. So I don’t know, maybe I’ll keep sight of my tiger a little while longer.