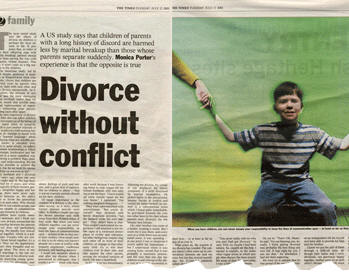 A US study says that children of parents with a long history of discord are harmed less by marital breakup than those whose parents separate suddenly. Monica Porter’s experience is that the opposite is true.

The most recent study into the effects of divorce on children is perhaps the most absurd so far. It proposes that, in order to help their offspring cope with family breakup, parents should have been paving the way with frequent, violent disputes. That way it won’t come as a big surprise to the children.

The American study, led by Paul Amato, professor of sociology at Pennsylvania State University, claims that children are harmed more by parents who rarely fight with each other and then divorce unexpectedly. As if, somehow, the element of surprise was the most damaging factor involved, rather than the sight, sound and terrible emotional repercussions of repeatedly witnessing your parents ripping each other apart.

My own experience of divorce and how this can affect children has convinced me of the fallacy of this latest piece of research, which is just another example of how academics with nothing better to do attempt to dazzle with their “learned language”, while producing what any sensible person knows is complete tosh. There is, quite simply, no sphere of human relationships in which aggression, intolerance and bitterness is a more expedient way of solving a problem than calmness and understanding. It’s not always possible to achieve the latter, but do we need Dr Amato to advise us not even to try?

My husband and I divorced nine years ago, when our sons were eight and 14. We had been married for 17 years, and while the majority of them weren’t, perhaps, altogether happy and fulfilling, there were never ugly scenes between us. We didn’t shout or throw the proverbial plates at each other. Why should we? We’re not volatile people, nor are we unable to communicate without recourse to violence.

Children have subtle emotional antennae, and I think our older son, at least, sensed that the relationship between his parents was not close, nor particularly binding. We hardly ever shared a meal together, which is a tell-tale sign. Couples who are intimate break bread together, it’s a ritual. They use the opportunity to share their thoughts and exchange ideas. The story of my failed marriage is the not uncommon tale of two diverse individuals marrying young, growing in opposite directions, and losing their connection. It wasn’t about acrimony, anger or blame.

When the marriage finally broke down, yes, my children were surprised. And I would never underestimate the effect it had on them -I’m not of the school which pretends that there is such a thing as the “scot-free” divorce when there are children involved, no matter what the circumstances. They were destabilised, resentful, confused. But I’m glad that they were never subjected to the distressing outbursts or slanging matches advocated by the professor. What the experience they went through ultimately taught my sons was that two people could resolve their differences in a dignified, civilised manner. There was pain involved in my marital breakdown, feelings of guilt and failure, and a great deal of sadness. But no violence or abuse -that is not an example parents should set for their children.

Of equal importance as the conduct of a divorce is the after-sales service, as it were, which former spouses provide each other. A childless couple can sign the decree absolute and walk away from their ill-fated union, if they wish. But when you have children together, you can never escape your responsibility to keep the lines of communication open -at least so far as they cover their welfare. How much easier this is to do when you haven’t already set a tone of conflict with frequent arguments, vociferous demands and battling lawyers.

I recall one occasion, about a year after my divorce, when I announced to colleagues that I couldn’t go for a drink with them after work because I was hurrying home to cook supper for my former husband, who was coming to see the boys. “I have to pick up some tomato sauce on the way home,” I explained. “I’m making spaghetti bolognese …”

They were open-mouthed with astonishment. “But you’re divorced!” they declared with barely disguised derision. “Let the bastard make his own supper.” They didn’t have a clue. They couldn’t understand the importance I still attached to the visible signs of a continued atmosphere of civility and tolerance. Let other belligerent couples slag each other off in front of their children, or engage in that other nasty trick: try to win their children over to their side, and take against the other parent, turning the wrecked remains of family life into a battlefield.

In the year or two immediately following my divorce, my younger son displayed the classic symptoms of a child distressed by marital breakdown. He picked fights in the playground, became harder to control and vented his inner turmoil on me. And in a subconscious move which I found quite remarkable, he gravitated towards the only two other boys in his class whose parents were divorced; the trio became best friends.

His older brother was more of a bottler, keeping it inside. But I could see it was there, and every once in a while there was an emotional scene. It was upsetting -at one point I was so desperate I nearly called the Samaritans – but I understood where it was coming from, sensed that it was probably a necessary process, and felt sure that one day my children would emerge at the other end of it and be reconciled to their lives -or at least as far as any of us ever is.

Nine years on, the trauma of my divorce has receded. The subject doesn’t often come up in conversation between me and my sons, but one day several months ago, the 17-year-old suddenly asked about it.

“You never really told me why you and Dad got divorced,” he said. Well, no, maybe I had been remiss. So, caught on the hop, I started to explain, in the somewhat vague terms in which people often discuss the most acutely felt areas of their life. Inevitably, I was a little on the defensive.

He cut in. “That’s OK, Mum,’ he said. “I’m not blaming you. Actually, I think getting divorced was probably the best thing you ever did. It was right for you. I can see that.” An absolution I had not been expecting.

He went on to remark that he was proud of the way I had created an independent life for myself and been able to provide for him and his brother.

I know we put the pair of them through a difficult time. Although their father and I were, obviously, not gloriously happy together, neither were we at each other’s throats, so the split must have come as a shock to them. It was exactly that bolt from the blue which Amato feels is more damaging than the gradual build-up caused by endless rows.

But I’d still rather have done it our way. Is a sudden shock worse than years of torment? I doubt it.