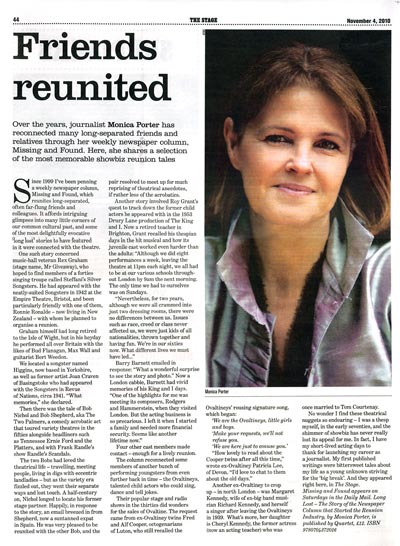 Over the years, journalist Monica Porter has reconnected many long-separated friends and relatives through her weekly newspaper column, Missing and Found. Here, she shares a selection of the most memorable showbiz reunion tales

Since 1999 I’ve been penning a weekly newspaper column, Missing and Found, which reunites long-separated, often far-flung friends and colleagues. It affords intriguing glimpses into many little corners of our common cultural past, and some of the most delightfully evocative ‘long lost’ stories to have featured in it were connected with the theatre.

One such story concerned music hall veteran Rex Graham (stage-name Mr. Giveaway), who hoped to find members of a Forties singing troupe called Steffani’s Silver Songsters. He had appeared with the neatly-suited Songsters in 1942 at the Empire Theatre, Bristol, and been particularly friendly with one of them, Ronnie Ronalde – now living in New Zealand – with whom he planned to organise a reunion. Rex himself had long retired to the Isle of Wight, but in his heyday he performed all over Britain with the likes of Bud Flanagan, Max Wall and guitarist Bert Weedon. We located a Songster named Higgins, now based in Yorkshire, as well as former artiste Joan Craven (of Basingstoke) who had appeared with the Songsters in Revue of Nations, circa 1941. ‘What memories!’ she declared.

Then there was the tale of Bob Nichol and Bob Shepherd, aka The Two Palmers, a comedy acrobatic act which toured variety theatres in the Fifties alongside headliners such as Tennessee Ernie Ford and The Platters, and with Frank Randle’s show, called ‘Randle’s Scandals’. The two Bobs had loved the theatrical life – travelling, meeting people, living in digs with eccentric landladies – but as the variety era fizzled out they went their separate ways and lost touch. A half-century on, Bob Nichol longed to locate his former stage partner. Happily, in response to the story an email breezed in from Bob Shepherd, now a sun-tanned ex-pat in Spain. He was very pleased to be reunited with the other Bob, and the pair resolved to meet up for much reprising of theatrical anecdotes, if rather less of the acrobatics.

Another story involved Roy Grant’s quest to track down the former child actors he appeared with in the 1953 Drury Lane production of The King and I. Now a retired teacher in Brighton, Roy recalled his thespian days in the hit musical and how its juvenile cast worked even harder than the adults: ‘Although we did eight performances a week, leaving the theatre at 11 p.m. each night, we all had to be at our various schools throughout London by 9 a.m. the next morning. The only time we had to ourselves was on Sundays. Nevertheless for two years, although we were all crammed into just two dressing rooms, there were no differences between us. Issues such as race, creed or class never affected us, we were just kids of all nationalities, thrown together and having fun. We’re in our sixties now. What different lives we must have led…’

Barry Barnett emailed in response: ‘What a wonderful surprise to see the story and photo.’ Now a London cabbie, Barry had vivid memories of his King & I days. ‘One of the highlights for me was meeting its composers, Rogers and Hammerstein, when they visited London. But the acting business is so precarious. I left it when I started a family and needed more financial security. Seems like another lifetime now.’ Four other cast members made contact – enough for a lively reunion.

The column re-connected some members of another bunch of performing youngsters, from even further back in time: the Ovaltineys, talented child actors who could sing, dance and tell jokes. (Their popular stage and radio shows in the Thirties did wonders for the sales of Ovaltine.) The request came from ex-Ovaltiney twins Fred and Alf Cooper, octogenarians of Luton, who still recalled the Ovaltineys’ rousing signature song, which began:

We are the Ovaltineys, little girls and boys.
Make your requests, we’ll not refuse you.
We are here just to amuse you.

‘How lovely to read about the Cooper twins after all this time,’ wrote ex-Ovaltiney Patricia Lee of Devon. ‘I’d love to chat to them about the old days.’ Another ex-Ovaltiney to crop up – in north London – was Margaret Kennedy, wife of ex-Big Band musician Richard Kennedy and herself a singer with the bands after leaving the Ovaltineys in 1939. What’s more, her daughter is Cheryl Kennedy, the former actress (now an acting teacher) once married to Tom Courtenay.

No wonder I find these theatrical nuggets so endearing: I was a thesp myself, in the early Seventies, and the shimmer of showbiz has never really lost its appeal for me. Actually, I have my short-lived acting days to thank for launching my career as a journalist. My first published writings were bittersweet tales about my life as a young unknown striving for the ‘big break’. And they appeared right here, in The Stage.

The Missing and Found column appears on Saturdays in the Daily Mail. Long Lost: The Story of the Newspaper Column that Started the Reunion Industry, by Monica Porter, is published by Quartet, £12. ISBN 978 0 7043 7201 6.