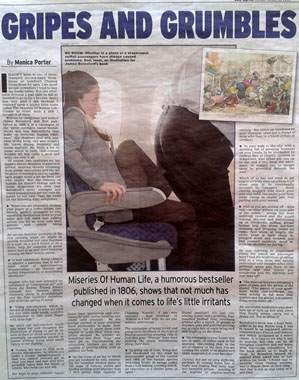 I hadn’t been in one of those cramped second-hand bookshops on London’s Charing Cross Road for ages. Like most people nowadays, I tend to buy my books online. But one afternoon recently I had time to kill, so I decided to goin for a browse. And I was very glad I did, because I chanced upon a quirky little tome called The Miseries of Human Life. Unable to resist such a title, I bought it at once.

Written by clergyman and author James Beresford, and first published in 1806, it is a catalogue of the ‘petty outrages, minor humiliations and tiny discomforts that make up everyday human existence’. His chapters deal with miseries of ‘the body’, of city life and country life, travel and dining, domestic and social matters. He finds a lot to moan about in early 19th century English life, but casts a droll and witty eye over it all.

Of course, two centuries on, his niggles about drunken stagecoach drivers, raucous crowds returning from public executions and the difficulties of reading in bed by candlelight, might seem a bit far from our own reality. But the essence of human life doesn’t change, and on closer inspection, it’s clear that Beresford’s petty outrages and minor humiliations are not very different to our own. Take his views on the following daily indignities…

Beresford’s book was a huge bestseller in its day. Before long it was re-issued in an expanded edition, translated into French and German, and widely acclaimed as a minor classic. It is easy to see why it was so popular. Not only can we all recognise ourselves and our many little day-today tribulations, but the book allows us to laugh at them. As Beresford himself explained, when asked why he had written the book: ‘I found that to describe these teasing troubles was to disarm them of their sting’. And that is just as true today as it was then.