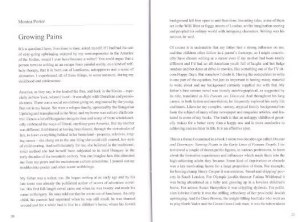 It is a question I have, from time to time, asked myself. If I had had the sort of easy-going upbringing enjoyed by my contemporaries in the America of the Sixties, would I ever have become a writer? You could argue that a person turns to writing as an escape from painful reality, as a kind of self-help therapy, that it is born out of loneliness, unhappiness and a sense of alienation. I experienced all of those things, to some measure, during my childhood and adolescence.

America, as they say, is the land of the free, and back in the Sixties – especially in New York, where I lived – it was alight with liberalism and permissiveness. There was a social revolution going on, engineered by the young. But not in my house. We were a refugee family, uprooted by the Hungarian Uprising and transplanted in the West, and my home was culture-clash central. I knew a lot of Hungarian émigrés then and many of them wholeheartedly embraced the ways of liberal, anything-goes America. But my mother was different. Embittered at having been forced, through the vicissitudes of fate, to leave everything behind in her homeland – property, relatives, singing career – she clung on to the one thing she could still control, her style of child-rearing. And unfortunately for me, she believed in the traditional, strict method she had herself been subjected to in rural Hungary in the early decades of the 20th century. You can imagine how this alienated me from my peers and the mainstream culture around me. I poured out my troubles into poetry and other secret scribblings.

My father was a writer, too. He began writing at an early age and by his late teens was already the published author of scores of adventure novellas. His first full-length novel came out when he was twenty and made his name in Hungary. He once told me that he wrote out of loneliness. An only child, his parents had separated when he was still small, he was shunted around and for a while had to live in a children’s home, where his Jewish background left him open to anti-Semitism. Inventing tales, some of them set in the Wild West or foggy streets of London, set his imagination soaring and peopled his solitary world with intriguing characters. Writing was his saviour, he said.

Of course it is undeniable that my father had a strong influence on me, and that children often follow in a parent’s footsteps, so I might conceivably have chosen writing as a career even if my mother had been totally different and I’d had an all-American youth full of laughs and hot fudge sundaes and hot dates at drive-in movies, like something out of the TV sitcom Happy Days. But somehow I doubt it. Having the compulsion to write is one part of the equation, but just as important is having meaty material to write about and my background certainly supplied me with that. My father’s first serious novel was loosely autobiographical, as suggested by its title, translated as His Parents are Divorced. And throughout his long career, in both fiction and non-fiction, he frequently explored his early life and times. Likewise my complex, uneasy, atypical family background has been the subject of many of my newspaper and magazine articles, and featured in some of my books. The truth is that an unhappy childhood generally makes for a better story than a happy one and is more conducive to achieving success later in life. It is an effective spur.

This is a theme I examined in a book I wrote two decades ago called Dreams and Doorways: Turning Points in the Early Lives of Famous People. I interviewed a couple of dozen public figures, in various professions, to learn about the formative experiences and influences which made them into the high-achieving adults they became. Some kind of deprivation or obstacle was a key motivating factor for a large proportion of them. For example, for boxing champ Henry Cooper it was extreme, ‘bread-and-dripping’ poverty in South London. For Olympic javelin thrower Fatima Whitbread it was being abandoned as a baby and growing up in a loveless children’s home. For actress Susan Hampshire it was crippling dyslexia. For politician Edwina Currie it was the stifling orthodoxy of her provincial Jewish upbringing. And for Dave Prowse, the weight-lifting beefcake who went on to play Darth Vader and the Green Cross Code man, it was the tuberculosis which struck him down aged thirteen, resulting in a year’s stay in hospital, followed by three years in a calliper.

Of course, in order to become a successful writer, you needn’t have had a difficult, painful youth. One of my interviewees, Terry Pratchett, clearly enjoyed a rather jolly, stable childhood with close family relationships. This is perhaps reflected in the genre of writing he later specialised in, which is light-hearted and humorous. And it is science fiction, born out of an endless fascination with the ‘sheer weirdness of the world’, coupled with a wacky, inventive imagination. Not serious literature, which turns inward to plumb the dark depths of the human soul and psyche.

There are four other professional writers in my book: Douglas Adams, Judy Blume, Barbara Cartland and Penelope Lively. Douglas had a disturbed childhood as a result of his parents’ vitriolic marriage and consequent divorce. As divorce was so uncommon back in the Fifties, it set him apart from others. As he grew older he also felt different because he was so much taller than his peers and because he was left-handed: ‘I do get this sense of the world having been designed for everyone other than me’. He told me he had been plagued by worries and self-doubt throughout his life; fertile ground for someone with creative talent, and perhaps his quirky, innovative brand of writing was his way of trying to make sense of it all and find his own place in the universe.

The American Judy Blume, bestselling author of novels for children and young adults, did not have a traumatic youth in New Jersey, but there were tensions and strained family relationships and a supressed angst which ‘eventually rose to the surface’ when she was a married woman of thirty-five, and led to her divorce. ‘It’s a terrible thing to go through an adolescent rebellion at that age and drag your children through it with you,’ Judy admitted. She said it was because she was fascinated ‘by the child that she was’ that so many of her books were preoccupied with the particular problems and anxieties of childhood.

You might not think that the oeuvre of someone like Barbara Cartland, the ‘Queen of Romance’, society belle and hobnobber with the privileged and pampered, could be born out of early deprivation. Her idealised novels featuring virginal damsels and dashing heroes don’t bear much similarity to gritty real life, after all. But I was intrigued to learn that she had had her share of serious misfortune in early life: the financial downfall of her once-wealthy father, followed by his death while fighting in the First World War (when Barbara was seventeen), leaving her widowed mother in straitened circumstances.

I wonder whether the prolific wellspring of her romantic fiction – 723 books which have sold an estimated billion copies worldwide – could possibly have been the war itself and its devastating aftershock? A quarter of a million British soldiers were killed during the WW1 and many thousands more were maimed or seriously injured. This generation of young men which was decimated was her generation. Along with her father, the war took many of her male friends and acquaintances. But her response was not to dwell on the tragedies  and grieve; she was no Vera Brittain. Instead she escaped into a world of high romance, with its perpetual abundance of handsome young men, and where a happy ending could always be relied upon.

As for Penelope, she had a ‘peculiar, solitary childhood’ in Egypt, where her father worked for an Egyptian bank. Her remote parents largely ignored her and she was brought up by a governess before being sent to boarding school in England, aged twelve. The school was utterly unsuitable for the brainy, bookish girl, as it was a philistine establishment which valued only sports, which she hated. As a ‘school pariah’ she had no choice but to hone her inner resources, which proved invaluable years later when, as a young wife and mother, she took up the vocation of novel-writing. She had no difficulty engaging in the lonely occupation. So the great ordeal of her adolescence – being ostracised – turned out to be an essential career asset.

There are many routes to the writing life, and I wouldn’t presume to make generalisations. But on the whole, I would say it is preferable to endure a measure of suffering if you are going to write for a living. As Seneca put it: ‘A gem cannot be polished without friction, nor a man perfected without trials.’

I suppose the real question I should ask myself is: would I rather have had a nice and easy, comfortable childhood, and not become a writer with oodles of juicy first-person copy, or was that early misery a price worth paying for my literary/journalistic output? As a teenager desperate to be part of the gang and ‘hang out’, I would have paid any price to be allowed out on dates with boyfriends and have sleepovers with the girls and go to all-night parties and raucous dances. Instead I would often be holed up in my bedroom, writing my anguished verses and woeful diary entries and trying to devise ways to sneak out of the house for secret assignations.

I had always written, from earliest childhood. Poems, stories, at least one silly play, and even an ‘autobiography’, which I began when I was six and added a little to each year – an original method, I thought. My father gave me my first typewriter, a portable Olivetti, when I was ten. I still have this treasured childhood memento, safely stored away in a cupboard – my alternative to the bedraggled teddy bear or one-eyed doll.

My father also gave me a sense of self-belief. At the age of twenty-one, by now living in London, I set out to land myself a beginner’s job in journalism and it never occurred to me that I wouldn’t get one. People warned me about the obstacles: I wasn’t English (this was the Seventies; London was a lot less multi-cultural then), I had no university education, I had no useful connections. Perhaps I should be applying for secretarial jobs instead, and with a little luck I might be allowed to do a bit of writing one day? I brushed this nonsense aside with disdain. And within three months I was taken on as staff writer for a venerable weekly magazine, the Local Government Chronicle. I stayed there for four years.

A decade or so later I wrote a book, Deadly Carousel, about my mother’s courageous exploits in wartime Budapest. It turned out that the woman who had once given me so much grief had also provided me with my greatest subject as an author. And both derived from the same source: her forceful personality.

So, was all that teenage angst worth it in the end? Looking back from my present perspective and with the wisdom of age, yes of course it was. I had a less liberated time than other teenagers did in the Swinging Sixties. Big deal. It was a long time ago and doesn’t matter anymore.

But what I see most clearly, beyond any answers to these questions with which I sometimes tease myself, is the blunt fact that in reality, none of it could have happened any other way. As some author once said: I didn’t choose writing, writing chose me.  And I am eternally grateful that it did, because frankly, I’m not much good at anything else.

Dates – and other ingredients