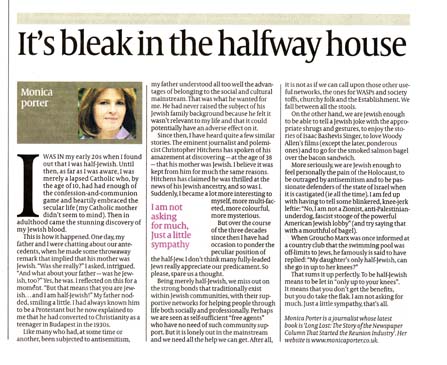 It’s bleak in the halfway house

I was in my early twenties when I found out that I was half-Jewish. Until then, as far as I was aware, I was merely a lapsed Catholic who, by the age of ten, had had enough of the confession-and-communion game and heartily embraced the secular life. (My Catholic mother didn’t seem to mind.) Then in adulthood came the stunning discovery of my Jewish blood. This is how it happened.

One day my father and I were chatting about our antecedents, when he made some throw-away remark which implied that his mother was Jewish. ‘Was she really?’ I asked, intrigued. ‘And what about your father – was he Jewish too?’ Yes, he was. I reflected on this for a moment. ‘But that means that you are Jewish…and I am half-Jewish!’ My father nodded, smiling a little. I had always known him to be a Protestant, but he now explained to me that he had converted to Christianity as a teenager in Budapest, in the 1930s.

Like many who had, at some time or another, been subjected to anti-Semitism, my father understood all too well the advantages of belonging to the social and cultural mainstream. That was what he wanted for me. He had never raised the subject of his Jewish family background because he felt it wasn’t relevant to my life and that it could potentially have an adverse effect on it.

Since then I have heard quite a few similar stories. Even the eminent journalist and polemicist Christopher Hitchens has spoken of his amazement at discovering – at the age of 38 – that his mother was Jewish. I believe it was kept from him for much the same reasons. Hitchens has claimed he was thrilled at the news of his Jewish ancestry, and so was I. Suddenly I became a lot more interesting to myself – more multi-faceted, more colourful, more mysterious.

But over the course of the three decades since then I have had occasion to ponder the peculiar position of the half-Jew. I don’t think many fully-leaded Jews really appreciate our predicament. So please, spare us a thought.

Being merely half-Jewish, we miss out on the strong bonds that traditionally exist within Jewish communities, with their supportive networks for helping people through life both socially and professionally. Perhaps we are seen as self-sufficient ‘free agents’ who have no need of such community support. But it’s lonely out in the mainstream and we need all the help we can get! After all, it’s not as if we can call upon those other useful networks, the ones for WASPs and society toffs, churchy folk and the Establishment, because we’re not members there, either. So you see? We fall between all the stools.

On the other hand, we are Jewish enough to be able to tell a Jewish joke with the appropriate shrugs and gestures, to enjoy the stories of Isaac Bashevis Singer, to love Woody Allen’s films (except the later, ponderous ones) and to go for the smoked salmon bagel over the bacon sandwich.

More seriously, we are Jewish enough to feel personally the pain of the Holocaust, to be outraged by anti-Semitism and to be passionate defenders of the State of Israel when it is castigated, i.e. all the time. I am fed up with having to tell some blinkered, knee-jerk leftie: ‘No, I am not a Zionist, anti-Palestinian-underdog, fascist stooge of the powerful American Jewish lobby.’ (And try saying that with a mouthful of bagel.)

This whole theme reminds me of that great Groucho Marx quote. When he was once informed at a country club that the swimming pool was off-limits to Jews, he replied: ‘My daughter’s only half-Jewish, can she go in up to her knees?’

That sums it up perfectly. To be half-Jewish means to be let in ‘only up to your knees’. It means that you don’t get the benefits, but you do take the flak. I’m not asking for much. Just a little sympathy, that’s all.

Monica Porter is a journalist whose latest book is Long Lost: The Story of the Newspaper Column That Started the Reunion Industry.