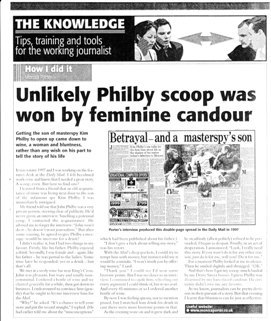 How I got my Philby scoop

It was winter 1997 and I was working on the features desk at the Daily Mail. I felt becalmed work-wise and knew that I needed a great story. A scoop, even. But how to find one?

I learned from a friend that an old acquaintance of mine was living next door to the son of the infamous spy Kim Philby. I was immediately intrigued. My friend told me that John Philby was a very private person, steering clear of publicity. He’d never given an interview. Smelling a potential coup, I contacted the acquaintance. He advised me to forget the interview: “John won’t do it – he doesn’t trust journalists.” But after some coaxing, he agreed to give Philby a message: would he meet me for a drink?

I didn’t realise it, but I had two things in my favour. Firstly, like his father, Philby enjoyed a drink. Secondly, I was female, and – again, like his father – he was partial to the ladies. Some time later he responded: yes to a drink, but that’s all.

We met at a seedy wine bar near King’s Cross. John was pleasant, but wary and totally noncommittal. I ordered a bottle of wine and we chatted generally for a while, then got down to business. I endeavoured to convince  him (gently) that he ought to let me interview him for the Mail.

“It’s a chance to tell your story and put the record straight.” (He had earlier told me about the “misconceptions” which had been published about his father.)

“I don’t give a fuck about telling my story.”

With the Mail’s deep pockets, I could try to tempt him with money, but instinct told me it would be a mistake. “I won’t insult you by offering money,” I said.

“Thank you.” I could see I’d won some brownie points. But I was no closer to an interview. I continued to cajole him, wheeling out every argument I could think of, but to no avail. And every 45 minutes or so I ordered another bottle of wine. By now I was feeling queasy, not to mention pissed, but I matched him drink for drink in case there were more brownie points in that.

As the evening wore on and it grew dark and he steadfastly (albeit politely) refused to be persuaded, I began to despair. Finally, in an act of desperation, I announced: “Look, I really need this story. If you won’t do it for any other reason, just do it for me, will you? Do it for me.”

For a moment Philby looked at me in silence. Then he smiled slightly and shrugged. “Okay.”

And that’s how I got my scoop, much lauded by my Derry Street bosses. I guess Philby was disarmed by my bare-faced candour. He certainly didn’t owe me any favours.

As we know, journalists can be pretty devious in their pursuit of a story. But that evening I learnt that bluntness can be just as effective.