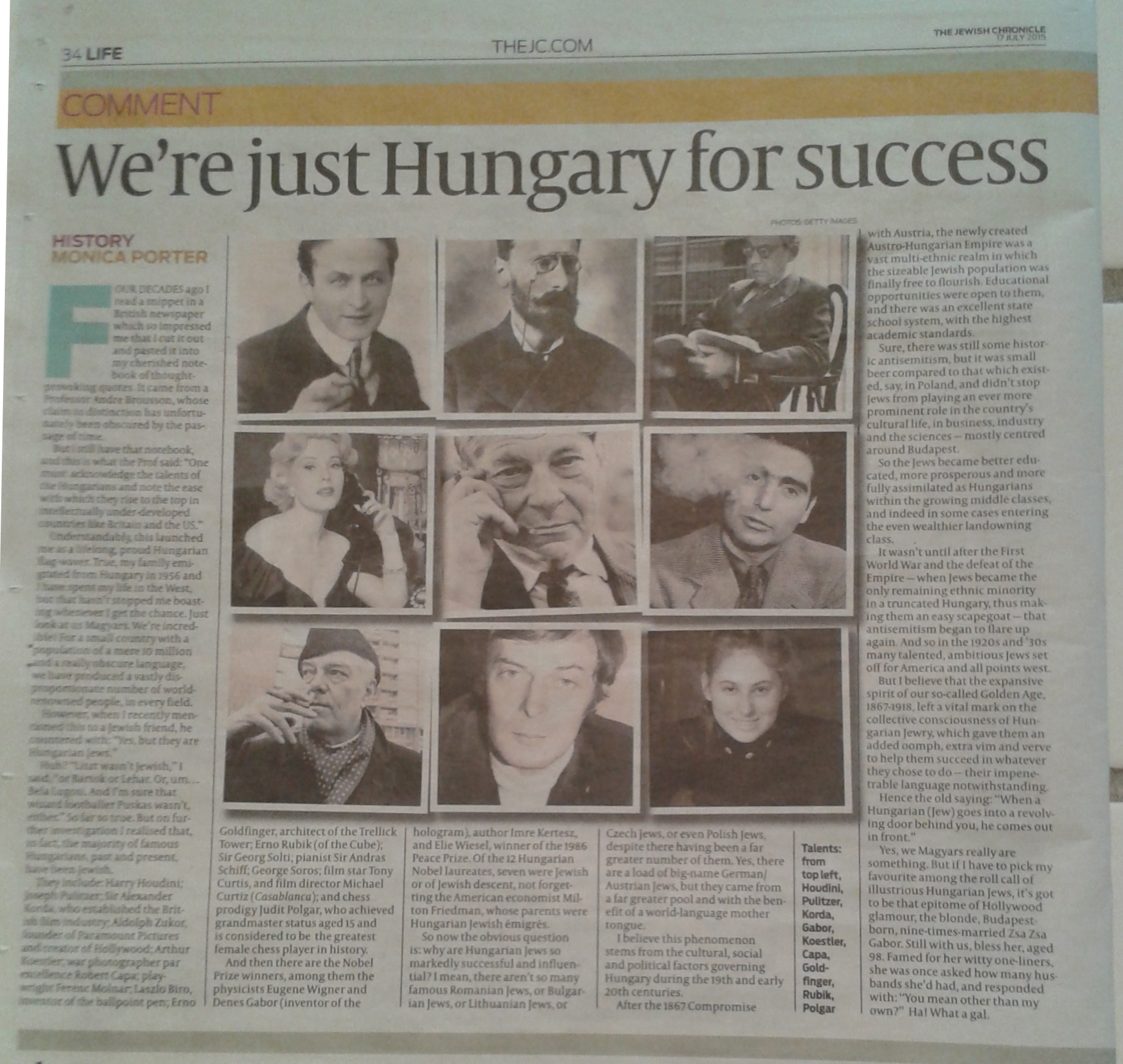 Four decades ago I read a snippet in a British newspaper which so impressed me that I cut it out and pasted it into my cherished notebook of thought-provoking quotes. It came from a Professor Andre Brousson, whose claim to distinction has been obscured by the passage of time. But I still have that notebook, and this is what the Prof said: ‘One must  acknowledge the talents of the Hungarians and note the ease with which they rise to the top in intellectually under-developed countries like Britain and the U.S.’

Understandably, this launched me as a lifelong, proud Hungarian flag-waver. True, my family emigrated from Hungary in 1956 and I have spent my life in the West, but that hasn’t stopped me boasting. Just look at us Magyars. We’re incredible! For a small country with a population of a mere 10 million and a really obscure language, we have produced a vastly disproportionate number of world-renowned people, in every field.

However, when I recently mentioned this to a Jewish friend, he countered with: ‘Yes, but they are Hungarian Jews.’

Huh? ‘Liszt wasn’t Jewish,’ I said, ‘or Bartok or Lehar. Or, um…Bela Lugosi. And I’m sure that wizard footballer Puskas wasn’t, either.’ So far so true. But on further investigation I realised that, in fact,

And then there are the Nobel Prize winners, among them the physicists Eugene Wigner and Denes Gabor (inventor of the hologram), author Imre Kertesz, and Elie Wiesel, winner of the 1986 Peace Prize. Of the twelve Hungarian Nobel laureates, seven were Jewish or of Jewish descent, not forgetting the American economist Milton Friedman, whose parents were Hungarian Jewish emigres.

So now the obvious question is: why are Hungarian Jews so markedly successful and influential? I mean, there aren’t so many famous Rumanian Jews, or Bulgarian Jews, or Lithuanian Jews, or Czech Jews, or even Polish Jews, despite there having been a far greater number of them. Yes, there is a load of big-name German/Austrian Jews, but they came from a far greater pool and with the benefit of a world-language mother tongue.

I believe this phenomenon stems from the cultural, social and political factors governing Hungary during the 19th and early 20th centuries. After the 1867 Compromise with Austria, the newly created Austro-Hungarian Empire was a vast multi-ethnic realm in which the sizeable Jewish population was finally free to flourish. Educational opportunities were open to them, and there was an excellent state school system, with the highest academic standards.

Sure, there was still some historic anti-Semitism, but it was small beer compared to that which existed, say, in Poland, and didn’t stop Jews from playing an ever more prominent role in the country’s cultural life, in business, industry and the sciences – mostly centred around Budapest. So the Jews became better educated, more prosperous and more fully assimilated as Hungarians within the growing middle classes, and indeed in some cases entering the even wealthier landowning class.

It wasn’t until after the First World War and the defeat of the Empire – when Jews became the only remaining ethnic minority in a truncated Hungary, thus making an easy scapegoat – that anti-Semitism began to flare up again. And so in the Twenties and Thirties many talented, ambitious Jews set off for America and all points west. But I believe that the expansive spirit of our so-called Golden Age, 1867 -1918, left a vital mark on the collective consciousness of Hungarian Jewry, which gave them an added oomph, extra vim and verve to help them succeed in whatever they chose to do – their impenetrable language notwithstanding. Hence the old saying: ‘When a Hungarian (Jew) goes into a revolving door behind you, he comes out in front.’

Yes, we Magyars really are something. But if I have to pick my favourite amongst the roll call of illustrious Hungarian Jews, it’s got to be that epitome of Hollywood glamour, the blonde, Budapest-born, nine-times-married Zsa Zsa Gabor. Still with us, bless her, aged 98. Famed for her witty one-liners, she was once asked how many husbands she’d had, and responded with: ‘You mean other than my own?’  Ha! What a gal.