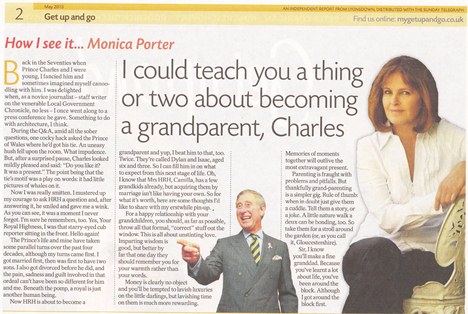 I could teach you a thing or two about grandparenting, Charles

Back in the Seventies when Prince Charles and  I were young, I fancied him and sometimes imagined myself canoodling with him. I was delighted when, as a novice journalist – staff writer on the venerable Local Government Chronicle, no less – I once went along to a press conference he gave. Something to do with architecture, I think.

During the Q & A, amid all the sober questions, one cocky hack asked the Prince of Wales where he’d got his tie. An uneasy hush fell upon the room. What impudence. But after a surprised pause, Charles looked mildly pleased and said ‘Do you like it? It was a present.’ The point being that the tie’s motif was a play on words:  it had little pictures of whales on it.

Now I was really smitten. I mustered up my courage to ask HRH a question, and after answering it, he smiled and gave me a wink. As you can see, it was a moment I never forgot. I’m sure he remembers, too. Yes, Your Royal Highness, I was that starry-eyed cub reporter sitting in the front. Hello again!

The Prince’s life and mine have taken some parallel turns over the past four decades, although my turns came first. I got married first, then was first to have two sons. I also got divorced before he did, and the pain, sadness and guilt involved in that ordeal can’t have been so different for him and me. Beneath the pomp, a Royal is just another human being.

Now HRH is about to become a grandparent and yup, I beat him to that too. Twice. They’re called Dylan and Isaac, aged six and three. So I can fill him in on what to expect from this next stage of life. Oh, I know that Mrs HRH, Camilla, has a few grandkids already, but acquiring them by marriage isn’t like having your own. So for what it’s worth, here are some thoughts I’d like to share with my erstwhile pin-up.

For a happy relationship with your grandchildren, you should, as far as possible, throw all that formal, ‘correct’ stuff out the window. This is all about unstinting love. Imparting wisdom is good, but better by far that one day they should remember you for your warmth rather than your words.

Money is clearly no object and you’ll be tempted to lavish luxuries on the little darlings, but lavishing time on them is much more rewarding. Memories of moments together will outlive the most extravagant present.

Parenting is fraught with problems and pitfalls. But thankfully grand-parenting is a simpler gig. Rule of thumb: when in doubt just give them a cuddle. Tell them a story, or a joke. A little nature walk a deux can be bonding, too. So take them for a stroll around the garden (or as you call it, Gloucestershire).