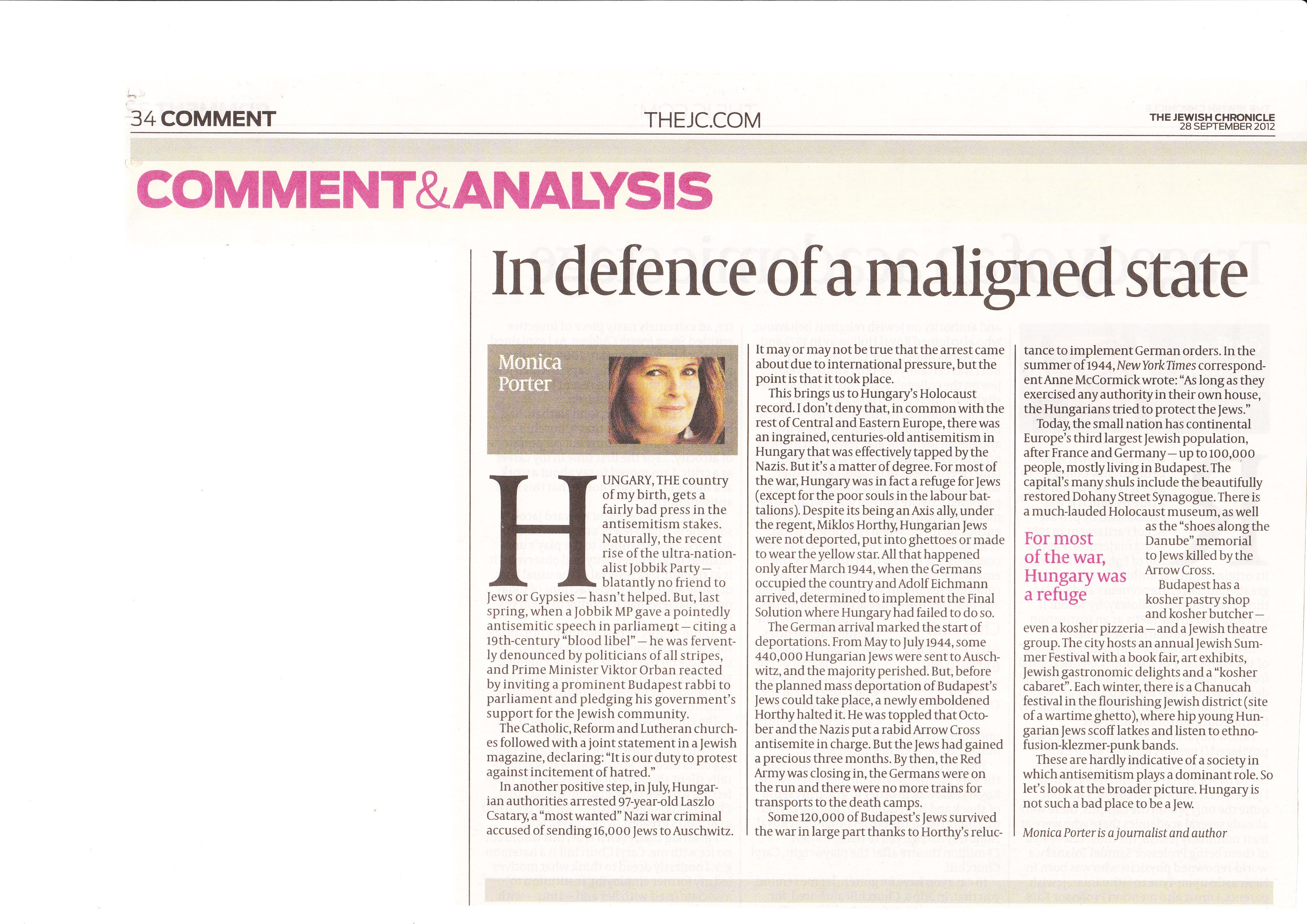 In Defence of a Maligned State

Hungary, the country of my birth, gets a fairly bad press in the anti-Semitism stakes. Naturally, the rise in recent years of the ultra-nationalist Jobbik Party – blatantly no friend to Jews or Gypsies – hasn’t helped. But last spring, when a Jobbik MP gave a pointedly anti-Semitic speech in Parliament – referring to a 19th century ‘blood libel’ case – he was fervently denounced by politicians of all stripes, and Prime Minister Viktor Orban reacted by inviting a prominent Budapest rabbi to Parliament and publicly pledging his government’s support for the Jewish community. A combined response from the Catholic, Reform and Lutheran churches soon followed with a statement in a Jewish magazine, declaring: ‘It is our duty to protest against incitement of hatred’.

In another positive step, in July, the Hungarian authorities arrested 97-year-old Laszlo Csatary, the Simon Wiesenthal Centre’s most wanted Nazi war criminal. He is accused of sending 16,000 Jews to Auschwitz while serving as police chief of the Hungarian city of Kassa (now Kosice in Slovakia).  It may or may not be true that the arrest came about due to international pressure, but the point is that it took place.

This brings us to Hungary’s record during the Holocaust. I don’t deny that, in common with the rest of Central and Eastern Europe, there was an ingrained, centuries-old anti-Semitism in Hungary which was effectively tapped by the Nazis. But it’s a matter of degree. For most of the war Hungary was in fact a refuge for Jews (except for the poor souls in the labour battalions). Despite being an Axis ally, Under Regent Horthy Hungarian Jews were not deported, nor even put into ghettoes or made to wear the yellow star. All that happened only after March 1944, when the German army occupied the country and Adolf Eichmann arrived, determined to implement the Final Solution himself, as Hungary had failed to do so.

The Germans’ arrival marked the start of deportations from the provinces. Between May and July 1944, approximately 440,000 Hungarian Jews were sent to Auschwitz, where the vast majority perished. The Jews of Budapest were next in line, but before the planned deportation could take place, a newly emboldened Horthy halted it. He was toppled that October and the Nazis put a rabid Arrow Cross anti-Semite in charge, but the Jews had gained a precious three months. By then the Red Army was closing in, the Germans were on the run and there were no more trains for transports to the death camps.

Some 120,000 of the capital’s Jews survived the war, in large part thanks to Horthy’s years of reluctance to implement German orders. In the summer of 1944, New York Times foreign correspondent Anne McCormick wrote: ‘As long as they exercised any authority in their own house, the Hungarians tried to protect the Jews.’

Today the small nation of Hungary has Continental Europe’s third biggest Jewish population, after France and Germany- an estimated 80,000 to 100,000, mostly living in Budapest. The capital’s many synagogues include the beautifully restored Dohany Street Synagogue (Europe’s largest). There is a much-lauded Holocaust museum, as well as the ‘shoes along the Danube’ memorial to Jews killed by the Arrow Cross.

Budapest has Jewish restaurants and cafes, a kosher pastry shop and kosher butcher – even a kosher pizzeria – and a Jewish theatre group. The city hosts an annual Jewish Summer Festival featuring klezmer concerts, a book fair and art exhibits, Jewish gastronomic delights and a ‘kosher cabaret’, whatever that is. And each winter there is a Hanukkah festival in the flourishing Jewish district (site of the wartime ghetto), where hip young Hungarian Jews scoff latkes and listen to ethno-fusion-klezmer-punk bands.

These are hardly indicative of a society in which anti-Semitism plays a dominant role. So let’s look at the broader picture. Hungary is not such a bad place to be a Jew.