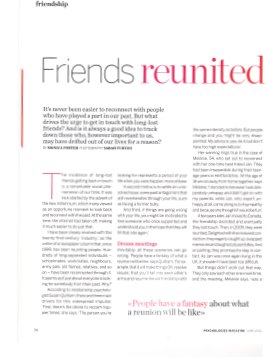 The reunion between long-lost friends is a remarkable social phenomenon of our time. It was kick-started by the advent of our new millennium, which many viewed as a turning point in their own lives as well as in the history of our civilisation, and an opportune moment to look back and reconnect with the past. At the same time the internet had begun to take off, making it much easier to do precisely that.

I have been closely involved with this 21st century ‘industry’, as the writer of a newspaper column which since 1999 has been reuniting people. Hundreds of long-separated individuals – schoolmates, workmates, neighbours, army pals, old flames, relatives, etc – have been reconnected through it. It seems as if just about everyone is looking for somebody from their past. Why?

According to the relationship psychologist Susan Quilliam, there are three main drivers for this widespread impulse: ‘Firstly, there’s the desire to reclaim happier times. The person you’re looking for represents a period of your life when you were happier, more at ease with yourself. A second motive is to settle an unresolved issue, some past antagonism which still reverberates through your life, such as facing a former bully. And thirdly, if things are going wrong with your life, you might be motivated to find someone who once supported and understood you, in the hope that they will fill that role again.’

Inevitably, all of these scenarios can go wrong. ‘People have a fantasy of what a reunion will be like,’ says Quilliam. ‘That it will make things okay, resolve issues. That you’ll fall into each other’s arms and resume the old friendship with the same intensity as before. But people change and you might be very disappointed. My advice is: yes, do it, but don’t have too high expectations.’

Her warning is certainly borne out in the case of 54-year-old Melanie, who set out to reconnect with her one-time best friend, Jan. They had been inseparable during their teenage years in Hertfordshire, and as Melanie explained: ‘At the age of 16 we ran away from home together. I decided to run away because I was desperately unhappy and didn’t get on with my parents, while Jan, who wasn’t unhappy at all, came along out of sympathy and because she thought it would be fun.’

A few years later Jan moved to Canada, their friendship grew looser and eventually they lost sight of each other. Then in 2009 they were reunited. Delighted with the renewed contact, they eagerly caught up with each other’s lives, swapped memories and laughed at past follies. And when they parted, they promised to stay in touch. As Jan was once again living in the UK, it shouldn’t be too difficult.

But it didn’t work out that way. They only saw each other one more time, and the meeting, Melanie told me, ‘was a little flat’. Once again, it seems their friendship has fizzled out.

The psychology behind this all-too-common tale has been eloquently analysed by the philosopher Robert Rowland Smith. As he puts it, once the curiosity of reuniting with the old friend has been satisfied, ‘there’s an almost physical sense of comedown, as if the adrenalin of reconnection has cooled. This is because there’s much more past than future, and any forward agenda is tough to get going.’

He argues that ‘the older you get the more defined you become and the less your identity will yield to splicing with someone else’s…In the intervening years, you’ve become more yourself, and the doorway into you that the friend once opened has started to close.’

But if the reunion is often a let-down, for the lucky it can fulfil the highest hopes. My column reunited boyhood friends Stewart Shaw and Peter Gold after nearly 40 years. Growing up in North London in the Sixties, Stewart was shy and lonely, ‘a depressed adolescent with an abusive father’. Then one day he met Peter, ‘a bright boy my own age who was outgoing, friendly, and didn’t give a fig for authority. He befriended me and suddenly my grey existence changed into a life sparkling with adventure and hope. I never looked back.’ Peter taught Stewart to fish and they went on fishing expeditions together.

After leaving school life pulled them apart and they lost touch, but recently Stewart – now based in America – was keen to find his old friend so he could thank him for what he did. Peter was traced, still living in London, and the pair spoke on the phone. ‘Just talking to him again,’ wrote Stewart, ‘and establishing that he is alive and well, was a wonderful thing.’

Since then Stewart and Peter have met on a few occasions in England. ‘We have great times listening to jazz, reminiscing and getting tipsy. Last year we went fishing on the Norfolk Broads and it was like the old days. Incredibly, he hasn’t changed at all.’ A missing piece of his life had slotted back into place.

The ever popular school reunion can be a fascinating, if more trivial, exercise. Quilliam says it is ‘largely about judging how well you’ve done in life compared to your peers’. But it too can produce a dramatic, life-enhancing outcome. One instance was my partner Nick’s 30-year reunion with classmates from his harsh, old-fashioned public school. Nick had had a miserable time there and the experience scarred him for life. He dreaded the very thought of going back. But in the end he did, out of curiosity. And during the dinner he found himself sitting beside the former pupil who had bullied him for years – now overweight, balding and stuck in a dull job.

‘As we got plastered together over our brandies,’ Nick recounted, ‘we had a profound, revelatory conversation. I’ve forgotten most of it. But it doesn’t matter, because the main thing is I managed to slay my demons for good.’

In these days of uncertainty and instability, we might feel that seeking out someone special from the past will give us a kind of anchor in life, set the clock back to better times. But we could be deluding ourselves and should be aware of the risks.

My column once featured the story of a middle-aged divorced man who, as a young soldier, had enjoyed a brief but passionate affair with a beautiful girl he never forgot. He yearned to find her again. He reckoned that maybe she was single, too, and just maybe they could rekindle that old fire. He was ecstatic when she made contact, and they arranged to meet for a drink at a hotel.

Some time afterwards he told me, dolefully, what had happened. She was still attractive, he said, and by a miracle she was also divorced and therefore ‘available’. But not available to him. They talked for hours and consumed a lot of drinks, but at the end of it all she said she ‘just wanted to be friends’. That old chestnut.

I always felt that the poor fellow would have done better not to seek out his lost damsel. Because then she would have remained forever a cherished memory of youthful love. As it is, he will remember her as the middle-aged divorcee who rejected him in a hotel bar after he spent a fortune on drinks.