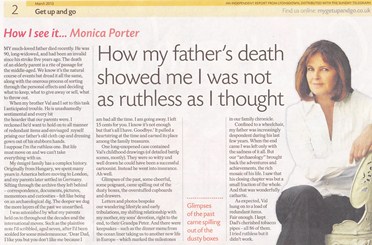 My much-loved father died recently. He was 90, long widowed, and had been an invalid since his stroke five  years ago. The death of an elderly parent is a rite of passage for the middle-aged. We know it’s the natural course of events but dread it all the same, along with the onerous process of sorting through the personal effects and deciding what to keep, what to give away or sell, what to throw out.

When my brother Val and I set to this task I anticipated trouble. He is unashamedly sentimental and every bit the hoarder that our parents were. I reckoned he’d want to hold on to all manner of redundant items and envisaged  myself prising our father’s old cloth cap and dressing gown out of his stubborn hands. I suppose I’m the ruthless one. But life must move on and we can’t take everything with us.

My émigré family has a complex history. Originally from Hungary, we spent many years in America before moving to London, and my parents later settled in Germany. Sifting through the archive they left behind – correspondence, documents, pictures, mementoes and curiosities – felt like being on an archaeological dig. The deeper we dug the more layers of the past we unearthed.

I was astonished by what my parents held on to throughout the decades and the international moves. Such as the plaintive note I’d scribbled, aged seven, after I’d been scolded for some misdemeanour. ‘Dear Dad, I like you but you don’t like me because I am bad all the time. I am going away. I left 15 cents for you. I know it’s not enough but that’s all I have. Good-bye.’ It pulled a heartstring at the time and earned its place amongst the family treasures.

One long-unopened case contained Val’s childhood drawings (of detailed battle scenes, mostly). They were so witty and well-drawn he could have been a successful cartoonist. Instead he went into insurance. Ah well.

Glimpses of the past, some cheerful, some poignant, came spilling out of the dusty boxes, the overstuffed cupboards and drawers. Letters and photos bespoke our wandering lifestyle and early tribulations, my shifting relationship with my mother, my sons’ devotion, right to the end, to their Grandpa Peter. And there were keepsakes – such as the dinner menu from the ocean liner taking us to another new life in Europe – which marked the milestones in our family chronicle.

Confined to a wheelchair, my father was increasingly despondent during his last few years. When the end came I was left only with the sadness of it all. But our ‘archaeology’ brought back the adventures and achievements, the rich mosaic of his life. I saw that his closing chapter was but a small fraction of the whole. And that was wonderfully cathartic.

As expected, Val hung on to a load of redundant items. Fair enough. I kept Dad’s cherished tobacco pipes – all 86 of them. I tried ruthless but it didn’t work.