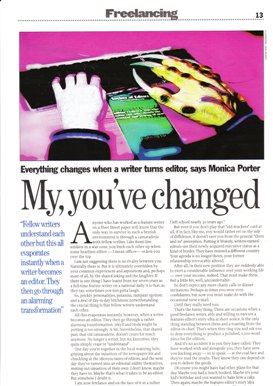 Anyone who has worked as a feature writer on a Fleet Street paper will know that the only way to survive in such a brutish environment is through a camaraderie with fellow scribes. Like front-line soldiers in a war zone, you buck each other up when some heartless editor (I mean officer) orders you over the top, and during a lull you share your meagre rations…oh all right, your Claret-fuelled lunches at Cafe Rouge.

I’m not suggesting that there is no rivalry between you. Naturally there is, and it’s heartily encouraged by ‘the system’. But it is ultimately over-ridden by your common experiences and aspirations, and perhaps most of all by the shared joking and the laughter. Hard-bitten hacks aren’t always so good on sympathy, but they can certainly do humour. And if there’s one thing I learnt from my seven years as a full-time feature-writer on a national daily, it’s that, as they say, sometimes you just gotta laugh or you cry.

So, prickly personalities, paranoia, rampant egotism and a deal of day-to-day bitchiness notwithstanding, the crucial thing is that fellow writers understand each other.

All this evaporates instantly, however, when a writer becomes an editor. Not an uncommon occurrence. They then go through a rather alarming transformation – Jekyll and Hyde might be putting it too strongly, a bit – into someone for whom that shared past, that old camaraderie, doesn’t count for much anymore. No longer a writer, but An Executive, they quite simply cease to ‘understand’.

One day you’re in the local watering hole together, griping about the injustices of the newspaper biz and chuckling at the idiosyncrasies of editors, and the next day they have turned into an editorial oddity themselves and are meting out injustices of their own. I don’t know, maybe they have to. Maybe that’s what it takes to be an editor. But somehow I doubt it.

I’m a freelance now, and on the face of it in a rather advantageous position. In a business where contacts are all-important, I can count several commissioning editors on major publications as former muckers from my Fleet Street days. But editors who were once your writing companions are no more receptive to your approaches (and sometimes decidedly less receptive) than editors whom you have only ever known as editors. I suspect it’s because they’re afraid you are going to presume on your old friendship and keep calling them up, expecting to get commissioned. Putting them into awkward spots. Taking up their valuable time.

No doubt in some cases that does happen, and must be very irksome. My friend Gill Hudson, newly-appointed editor of the Radio Times, tells me: ‘The whole world wants to write for the RT, and since taking over, I’ve had new best friends popping up all over the place, eager for commissions, including people I haven’t seen since I left school nearly 30 years ago.’

But even if you don’t play that ‘old muckers’ card at all, if in fact, like me, you would rather err on the side of diffidence, it doesn’t save you from the general ‘them and us’ perception. Putting it bluntly, the writer-turned-editor uses his newly-acquired executive status as a kind of  border between you. He has entered a different country. Your agenda is no longer his agenda. And your former relationship has been irrevocably altered. After all, in his new position he is suddenly able to exert a considerable influence over your working life – over your income, indeed – and that must make him feel a little bit, well, uncomfortable.

So don’t expect chatty phone calls from them or dinner invitations. You used to party together late into the night, perhaps at times you were even confidantes, but now you must make do with the occasional terse email…

Until they really, really need you. That’s the funny thing, you see. There are occasions when a good freelance writer, able and willing to execute a features editor’s story idea at very short notice, is the only thing standing between him and a roasting from the editor-in-chief. That’s when they ring you, straight after morning conference, and ask you to drop everything in order to produce a polished 1200-word piece for the edition.

And it’s no accident that it is you they have called upon. It’s precisely because they know you so well from all that past comradeship. They’ve worked with you and alongside you, they’ve seen you hacking away – so to speak – at the coal face and read the results. They know they can depend on you to deliver the goods.

Of course you might have had other plans for that day. Maybe you had a lunch booked with an important contact. Maybe it’s your kid’s birthday and you wanted to bake him a cake. Then again, maybe the features editor’s story idea doesn’t entirely grab you. Whatever. The point is, you do drop everything and write the piece. It’s your job.

So, for a little while, the two of you are old muckers again. ‘You’re a star,’ they coo down the phone when you’ve filed your copy and they’ve whipped it straight over to the subs. ‘Must get together soon, darling.’ But it’s a short-lived intimacy. The next day it’s back to the ‘them and us’ syndrome, the separate countries. There are many other stars in their firmament.

There’s no point in asking myself: would I be different if I were an editor? Because I’ve never aspired to being one. For me, creating the copy, in my own voice, has always been more appealing than being an administrator.

Still, I don’t resent any of my old writer pals who have gone over to the other side. More money, better perks. Who can blame them? And they have, on occasion, been pretty good to me. I love them, really. A bit.