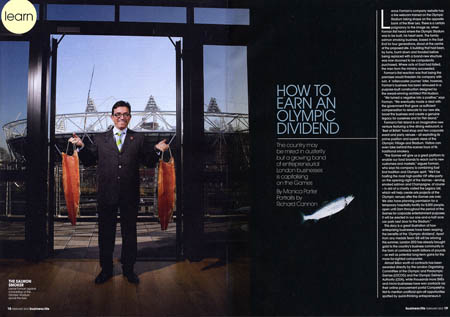 How to Earn an Olympic Dividend

Back in 2008, Catering 2 Order was a small catering business in southeast London with a turnover of £100,000, owned by a blind black man called John Charles. Construction had just begun at the Olympic building site in Stratford, and as they were based near it they started selling sandwiches to the construction workers. They proved very popular, so Charles applied for and got a contract to provide catering services to the site, which in turn led to further contracts at other London building sites. The company’s turnover now is around £5 million, and last year Charles was awarded Entrepreneur of the Year at the Black Business Awards.

‘The Olympics have provided loads of business opportunities, with many geared towards small companies like mine,’ says 39-year-old Charles. ‘The required standard for an Olympics contract is high, so having one looked great on our CV and gave us the credibility we needed to approach other organisations. It’s normally difficult for small enterprises to get the track record they need to grow. There’s a bias against them, especially in catering, where procurement departments are stuck in their ways. The Olympic Games gave us a terrific once-in-a lifetime platform to show what we could do.’

His story is a great illustration of how enterprising businesses, right from the start, have been reaping the benefits of the ‘Olympic dividend’. Apart from any medals Team GB will be winning this summer, London 2012 has already brought gold to the country’s business community in the form of contracts worth billions of pounds – as well as potential long-term gains for the more far-sighted companies.

Almost £6 billion worth of contracts has been awarded directly by the London Organising Committee of the Olympic and Paralympic Games (LOCOG) and the Olympic Delivery Authority (ODA), while thousands more SMEs and micro-businesses have won contracts via their online procurement portal CompeteFor. Not to mention all the unofficial spin-off opportunities spotted by quick-thinking entrepreneurs.

The Games will pull in an estimated 900,000 staying visitors plus 5.5 million day visitors in London over the six-week period from end of July to early September, and according to Visa, a long-term global sponsor of the Olympics, the UK is set to benefit from an additional £750 million in consumer spending. Visa says the retail, leisure and travel sectors will be the biggest winners – raking in more than £500 million between them – and anticipates a ‘total stimulus to the UK economy’ of £5.1 billion.

The London Business Network was set up by the CBI, London Chamber of Commerce and others to help the capital’s businesses maximise the economic benefits of the Olympics. Its CEO, Brett Taylor, says a number of small businesses have seized on the commercial opportunities and been able to grow as a result of securing Olympics-related business.

Forman’s Fish Island is an imaginative new venture created by a fourth-generation East End salmon-smoking business next door to the Olympic site. It features a fine dining restaurant, ‘best of British’ food shop and two corporate event and party venues – all exploiting its prime position and superb views of the Olympic Village and Stadium. Visitors can even take behind-the-scenes tours of its traditional smokery.

‘The Games will give us a great platform to enable our food brands to reach out to new customers and markets,’ claims MD Lance Forman, who says his company is

combining East End tradition and Olympic spirit. ‘We’ll be hosting the most high-profile VIP after-party on the opening night of the Games – serving smoked salmon and Champagne, of course – in aid of a charity called the Legacy List, which will help create arts projects at the Olympic venues after the Games are over.

‘We’ve also got planning permission for a temporary hospitality facility to accommodate 8,000 people and which will be open until 2 a.m. throughout the period of the Games, for corporate entertainment purposes. It will be erected in our one-and-a-half acre car park next door to the Stadium.’

Forman says the Olympics have been a ‘rollercoaster journey’ for him. Initially it threatened to ruin his business, as he was forced to move his factory from its original site – it stood where the Stadium is now. ‘But we turned a negative into a positive. We eventually made a deal with the government which gave us sufficient compensation to relocate to our new site, boost the business and create a genuine legacy for ourselves and for Fish Island.’

Businessman David Carruthers has also found an innovative way to capitalise on the Olympics, by setting up East London Boats, London’s first punting station, on the Regents Canal in Mile End. It’s well-placed to make the most of the surge of visitors to the area and provide them with a chance to punt along the historic waterway. There is even a ‘chauffeur service’ for those who haven’t got the knack.

Water Chariots is another start-up capitalising on the canal during the Games, by providing a hop-on hop-off boat service to the Olympic Park. Departing from Limehouse, near Tower Bridge, and from Tottenham Hale in North London, the service will deliver visitors by barge, with tickets costing from £20. ‘We’re also planning for the legacy phase, when we’ll convert the barges into hire boats for people wanting to explore London’s canals and rivers,’ says Peter Coleman, manager of Water Chariots.

And still on the theme of travel, airline Emirates has signed a £36 million sponsorship deal for Mayor Boris Johnson’s much-vaunted Thames cable car scheme. The UK’s first urban cable car will run over the river between Royal Victoria Dock and the O2 Arena on Greenwich Peninsula, crossing every 30 seconds and carrying up to 2,500 passengers an hour on the five-minute journey. Transport for London has appointed Mace, the company behind the London Eye and Shard Tower, to deliver the £50.5 million scheme.

The capital’s hotel sector has seen large-scale developments in the three-year run-up to the Games, with new hotels opening in both the luxury and budget markets – more than 10,000 additional rooms in all. Among those due for completion this year [2012] is the Grade II listed Shepherd’s Bush Pavilion on Shepherd’s Bush Green – originally a cinema – which is being converted into a new four-star hotel. Another is the iconic 10 Trinity Square, originally the Port of London Authority’s HQ, which occupies a prominent location overlooking the Thames and Tower of London.

Feeding the demand for budget accommodation in central London, the famous Trocadero centre in Piccadilly Circus is being turned into a Japanese-style ‘pod’ hotel. Behind the building’s Grade II listed façade will be 495 windowless bedrooms, each measuring a tiny 12 to 17 square metres. Premier Inn is also opening a 267-room budget hotel in Stratford, adjacent to the Olympic Stadium.

‘The Olympics is a real boon for the UK hotel industry,’ says Miles Quest, spokesman for the British Hospitality Association, which represents hotels and restaurants. ‘Of London’s 110,000 hotel rooms, 40,000 are already allocated to LOCOG and most major West End hotels are already fully booked for the Olympic period. We’re expecting something like 92% occupancy, about the same as last summer, because while many visitors are coming for the Olympics, others will stay away in order to avoid that period.

‘Top-end restaurants, which are generally busy anyway due to London’s ever-booming corporate and leisure entertainment sectors, will be doing even brisker business with so many VIPs in town. Crucially, the Games will attract many first-time visitors to London, so it’s an opportunity for the city to showcase what it can provide to a whole new market.’

Holiday Inn won the LOCOG contract as ‘Official Hotel Services Provider to London 2012’, which the company claims will be worth £25 million in additional bookings. They are opening two new hotels in Stratford to coincide with the Olympics, and athletes, LOCOG officials and other organising bodies will be staying in various Holiday Inns in the lead-up to and during the Games.

The Lanesborough – reputedly London’s most expensive hotel, with rooms costing from £415 to £14,000 +VAT – has already sold all rooms and private dining rooms for the Olympic period, despite deciding against contracting with LOCOG. ‘Those guests are all coming for the Olympics and are serious VIPs,’ says MD Geoffrey Gelardi, ‘but they are private reservations and not to do with any official body.’

Sara Parker, the CBI’s London region director, is optimistic that the Olympics will provide a much-needed shot in the arm for businesses and the UK economy. ‘It will particularly benefit the capital, as London-based companies have won 60% of ODA contracts. It will also create a lasting jobs legacy as new businesses that have established themselves thanks to the regeneration of East London continue to employ local people. Whilst putting on an amazing Games to showcase the best of London is essential, it’s the legacy that it will leave for businesses and Londoners beyond 2012 that is the vital part of hosting the Games.’

The Olympics have clearly unleashed a remarkable wave of entrepreneurial innovation amongst businesses of all types and sizes. Which only goes to show that, despite the economic gloom and financial crises of recent times, Britain’s business community is as dynamic as ever.

A history of great London events

A vast display of international industrial works, and forerunner of future world fairs.
When: May – October 1851
Where: the temporary ‘Chrystal Palace’ in Hyde Park
No. of attendees: 6 million

Moral-boosting post-war show of innovations in British design, and celebration of Great Exhibition’s centenary.
When: May – October 1951
Where: South Bank near Waterloo
No. of attendees: 10 million

Nicknamed the ‘Austerity Olympics’ as rationing was still in force, Germany and Japan were not invited to this first Games after a 12-year interruption due to WW2.
When: 29 July – 14 August 1948
Where: Wembley Stadium and elsewhere
No. of attendees: 2 million

Under manager Alf Ramsey the England football team had its finest hour by beating West Germany and winning the Cup.
When: 11 – 30 July 1966
Where: Wembley Stadium
No. of attendees: 1.6 million