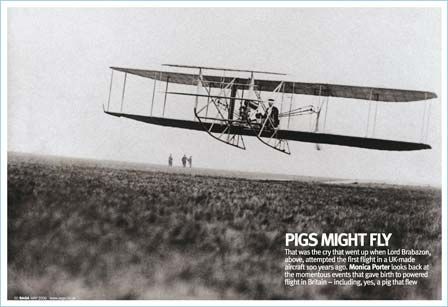 That was the cry that went up when Lord Brabazon, right, attempted the first flight in a UK-made aircraft 100 years ago. Monica Porter looks back at the momentous events that gave birth to powered flight in Britain – including, yes, a pig that flew.

The Isle of Sheppey, jutting out of the Kent coastline, is an out-of-the-way corner of England. With no obvious commercial attractions, it’s been left behind by the tourism industry. At the far end of it lies quiet and slightly bleak Shellbeach. Nothing special…or so you would think.

But these unremarkable fields with their grazing cows, crisscrossed with ditches and bordered by a low sea wall, mark the site of a fabulous episode of our national history. For it was here, exactly one hundred years ago, that a Brit first flew an aeroplane in this country. It is the birthplace of British aviation and its story has all our favourite ingredients: a spirit of adventure, delightful eccentricity and a dashing young trailblazer.

On Sunday 2nd May, 1909, the 25-year-old J.T.C. Moore-Brabazon (later Lord Brabazon of Tara) flew his 50hp Voisin biplane, the Bird of Passage, 500 yards at a height of about 50 feet. In mid-air the plane, basically an enormous box-kite, was struck by a gust of wind and tipped sideways, eventually crashing into the ground with much snapping of wires and struts. As John Moore-Brabazon later recalled: ‘…the engine left its moorings and came hurtling through the air from behind me – missing me by inches – and buried itself in the ground…A bit bumped and bruised and dazed, and pinned down by wires, but without a scratch, I recovered to find myself being licked by my two dogs, who had chased after me during the flight.’ And so the magnificent man in his flying machine entered the history books…

A few years earlier, in December 1903, Orville Wright had made the world’s first successful powered-flight at Kitty Hawk, North Carolina, in the Flyer he had designed with his brother Wilbur. Henri Farman had begun flying in France and in October 1908 the American Sam Cody, a former Wild West showman now working for the British army, completed the first recorded powered-flight in Britain when he flew British Army Aeroplane No 1 a distance of 463 yards at Farnborough.

These feats had inspired the adventurous Brabazon, who by his mid-twenties was already a champion racing driver of early automobiles and skilled hot-air balloonist – passions which he shared with his close friend, the Hon. Charles Rolls, of Rolls-Royce fame. They had got to know each other when Brabazon was a student at Cambridge and took a holiday job as Rolls’s mechanic. Soon the pair were making model gliders, which they tested by launching them from one of the boxes at the Albert Hall, having been let in by an obliging attendant.

In the autumn of 1908 Brabazon went to Paris and acquired his biplane from the Voisin brothers, pioneering aircraft builders. A self-declared ‘natural coward’ with no head for heights, Brabazon described his first experience of being airborne in a heavier-than-air machine as ‘like sitting on a jelly in a strong draught’. Alarming. But he was hooked.

He shipped the Bird of Passage home to England to exhibit at the first Aero Show, held at Olympia in March 1909; it was the only machine on display which had ever left the ground. Public fascination with the newfangled flying machines led the Daily Mail to offer a £1,000 prize for the first British-made machine able to fly a circular mile. Brabazon resolved to win it…but first it would have to be built.

And so to the Isle of Sheppey and secluded Shellbeach. It was here that the Short brothers, hot-air balloon makers of Battersea, had just set up the world’s first aeroplane factory. They leased 400 acres for their workshops, hangars and flying ground (or ‘aerodrome’). The location was perfect for flying trials, being flat and breezy, free of obstacles and not too far from London. Messrs. Short Bros. had an order from the Wrights to build six of their Flyers; now Brabazon commissioned them to construct a machine for him.

Adjacent to the flying ground was Mussel Manor, home of the British aviation pioneers’ Aero Club, an erstwhile ballooning club founded in 1901 by a portly London wine merchant and avid balloonist called Frank Hedges Butler. The Short brothers took up residence at the Manor in early 1909 and before long Brabazon, having installed his Bird of Passage at the Shorts’ works, made it his base, too. So it was that on 2 May he made his historic flight there, taking off from just outside the factory and heading towards Mussel Manor.

Two days later a momentous event took place at Shellbeach. Orville and Wilbur, newly arrived in England, came to inspect the works and see how their Flyers were coming along. The balding brothers in their bowler hats were driven down from London by Charles Rolls in his Silver Ghost and given a tour. They declared themselves more than happy with the world’s first aeroplane production line and were agreeably surprised by the flying grounds, which Wilbur described as ‘superior in every way to those which we have used elsewhere’.

They lunched at Mussel Manor together with the leading lights of the Aero Club, afterwards posing for a group photo before the front door. This picture of the ‘Founding Fathers’ of aviation – men of wealth, vision and enterprise – captures a beguiling moment in history when humanity stood on the cusp of a new era.

The Wrights are sitting in the middle, with youthful Brabazon, handsome and dark-haired, on one side of them and the moustachioed, distinguished-looking Rolls, seven years older, on the other.

In the line-up behind are the Short brothers, Oswald, Horace and Eustace. Horace, the eldest, who suffered from a cranial deformity which gave him a grossly enlarged head, was the most brilliant and creative of the three. He had, remarked Brabazon, ‘an extraordinary grasp of every scientific department of life’. His past adventures included an escape from cannibals after being shipwrecked in the South Pacific, and trekking through South America, where the awed natives treated him as a god.

Standing in the middle, smoking a pipe, is the generous aviation patron Frank (later Sir Francis) McClean. He has a sedate air but would soon go on to train the first Royal Navy pilots and perform the celebrated feat of flying his biplane through Tower Bridge. Beside him is Griffith Brewer, the Wrights’ patent agent in Britain and the first Englishman to fly in an aeroplane (albeit as a passenger) when he went up with Wilbur in France the year before.

‘I think we were all a little mad,’ Brabazon wrote decades later. ‘We were all suffering from dreams of such a wonderful future.’

By the autumn of 1909 Brabazon’s new Shorts’ Biplane No. 2 was ready (No. 1, built for McClean, proved a dud). It cost him £1,500. Unlike the Voisin, which had an under-carriage with wheels, it had running skids and was launched off a rail which had to point directly into the wind. A tedious business. Then, wrote Brabazon, ‘When you got into the air there was nobody to tell you what to do, how to balance for and aft or how to make a turn…it was in essence an adventure into the unknown.’

Nothing daunted, on 30th October at Shellbeach he successfully flew a circular mile (in fact a mile and three-quarters) in two minutes and 36 seconds, at a height of 20 feet, in his all-British machine. He won the Daily Mail prize, quipping that all in all he’d spent £2,500 in order to collect £1,000. The observers had included his spirited wife Hilda, Charles Rolls, assorted Aero Club officials and the Mail’s celebrated reporter Charlie Hands, who rushed back to Fleet Street to write up his scoop.

Whilst waiting to go up in his machine that day Brabazon heard a sceptic in the crowd remark that ‘pigs might fly’. His gleeful response came six days later when he flew again from Shellbeach, taking a piglet along in a wicker basket tied to one of the wing-struts. He dubbed the animal Icarus II and a sign on his basket read: ‘I am the first pig to fly’. The event is on record as the world’s first ‘live cargo’ flight.

In March 1910 Brabazon was awarded the first British pilot’s license by the re-named Royal Aero Club. Rolls received the second.

In June of that year Rolls made the first non-stop two-way crossing of the English Channel in his Wright Flyer. It took him an hour and a half and he returned to a cheering crowd at Dover. The following month he was the star attraction at a big air show near Bournemouth.

But this time tragedy struck. During one of the competitions the tail assembly broke off his plane, it went into a dive and Rolls fell out, dying on impact from a broken neck. At the age of 33 he was the first Brit to be killed in an aeroplane accident.

Sickened by the ‘disaster to aviation and loss of so dear a friend’, Brabazon didn’t fly again until the First World War.

Indefatigable and ever innovative, Brabazon went on to further glories. At the outbreak of WWI he joined the Royal Flying Corps and pioneered the new science of aerial photography, for which he received the Military Cross. Afterwards he entered politics, served as a junior minister in the 1920s, and during WW2 was Minister of Aircraft Production in Winston Churchill’s government. He received a peerage in 1942 and was active in the Lords and in business, was an accomplished yachtsman and golfer, and in his seventies was still tobogganing down the fearsome Cresta Run. He died in 1964, aged 80.

A life full of achievement. Yet in his 1956 memoirs, The Brabazon Story, he reflects on the history of aviation – to which his name is inextricably linked – with a note of regret: ‘Anyone who looks at flying today will not have any doubt in his mind that on the whole it would be better if it had never been discovered…Flight, which was to knit the world together into a true internationalism…has become the bogey and terror of the world from which we hide like rats.’

He had lived through the Blitz, Pearl Harbour, Hiroshima. One can, perhaps, understand his sentiment.

Events to celebrate the centenary of the birth of British aviation will be held at the original Mussel Manor Aero Clubhouse, now Muswell Manor holiday park, on 2-4 May. For details see www.muswellmanor.co.uk or call 01795-510245. 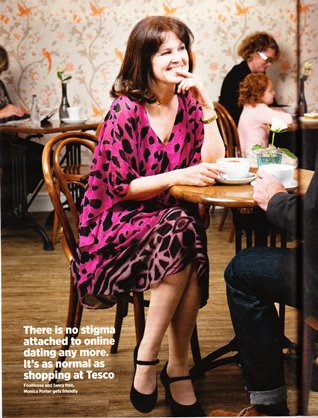