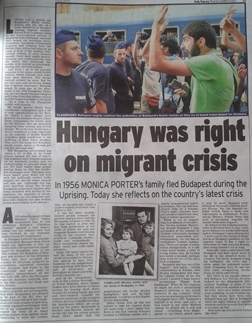 Refugees at the gates

Little over a month ago Budapest’s Keleti Railway Station was the site of a major flashpoint in Europe’s ongoing migrant debacle. Barred from boarding trains to the much-vaunted nirvana of Angela Merkel’s Germany – because they lacked the necessary documentation – hundreds of frustrated migrants and refugees from the Middle East, Africa and Asia set up camp in front of the opulent 19th century station. It soon became squalid, there were angry demonstrations and the inevitable confrontations with the police. But eventually the hordes were moved on westwards, leaving their detritus behind.

Last week I sat in the autumn sunshine in the plaza outside Keleti Station, where once again it is business as usual. Tidiness and order have been restored. The recent turmoil seemed far away. But for me personally, this spot and its recent drama has a special resonance. Because nearly 60 years ago, in the aftermath of the 1956 Hungarian Uprising, my own family became refugees and it was from this railway station that we began our flight to freedom – on a train to the Hungarian border with Austria.

My family gained liberty from communist subjugation and a life of new opportunities in the West, for which I have always been grateful. And as a former refugee, of course I have great compassion for others, such as the Syrians, who are genuinely escaping from tyranny and mortal danger. We in the free world have a moral obligation to help, especially as the majority of Middle Eastern countries seem indifferent to the suffering of their fellow Muslims. Why don’t the mega-rich Emirates, Saudi Arabia, Qatar or Kuwait put out the welcome mat?

The Hungarian government has taken a lot of flak for its tough stance against the tide of mixed-bag migrants and refugees massing on its southern border, and for endeavouring to process them as per EU laws rather than simply waving them on into the border-free Schengen zone. The razor-wire fence hasn’t gone down too well with the politically-correct lefty brigade, nor did the water cannon and tear gas. (Although less has been reported about the 20-odd Hungarian policemen injured after being attacked with stones by the migrants, the majority of whom, incidentally, are not desperate parents with children, but able-bodied young men seeking work abroad.)

And when Hungary’s Prime Minister Viktor Orban announced that he was defending Europe’s ‘Christian identity’ against a vast Islamic influx, well, you can imagine how that was received by our zealously multicultural EU neighbours. Meanwhile in Hungary, his popularity has soared. Because what others elsewhere might not appreciate is that his words held a deeper, historic significance for Hungarian ears. In the 16th century the Kingdom of Hungary was invaded by the Ottoman Turks, who then occupied the country for 150 years, enslaved its population, converted churches into mosques, laid waste to the countryside and put paid to Hungary’s independence all the way until 1989. After the Ottomans came the Austrian overlords, then in the 20th century the Nazis and the Soviets.

These national traumas over successive centuries are not forgotten. And while the Hungarians are pleased to be part of the EU, they are damned if they will let it ride roughshod over their country’s hard-won, recently regained sovereignty. Still, few of my compatriots can have missed the irony of so many asylum-seekers from distant lands clamouring to enter the country that, six decades ago, nearly a quarter-million of us were compelled to flee.

It irks me when muddle-headed people compare the present migrant wave with the Hungarian refugees of 1956. Or, for that matter, to Jews who fled Nazi persecution in the Thirties or joined the post-war diaspora. Besides contributing richly to the societies they settled in – culturally, intellectually and economically – those immigrants shared the same values and could easily integrate.

Sadly, the same cannot be said for many of the more recent newcomers to Europe, who appear to have little fondness for our enlightened, egalitarian, pluralistic ways, but bring with them the sort of intolerance and prejudices we dispensed with several centuries ago. And as for ‘integration’, look at the London Borough of Tower Hamlets, where Islamic bullies have been known to harass women for wearing short skirts, couples for holding hands, gay men and beer-drinkers. Consider the rundown banlieues on the outskirts of Paris, ghettos of disaffected Muslim immigrants which are no-go areas for the police. Meanwhile in Sweden anti-Semitic attacks are on the rise but the craven government won’t admit that the perpetrators are recent Muslim immigrants, and not far-right skinheads. I could go on, but frankly it’s too depressing.

Viktor Orban sees all this and refuses to take his country down the same road. I don’t blame him. Even in the 21st century, Hungary remains a Christian nation with a largely homogeneous native population. You can still hear church bells on a Sunday. That’s right, churches have not yet been turned into wine bars or luxury pads!

Which is not to suggest that it is illiberal or xenophobic. On the contrary. Wandering around Budapest I was astounded at the number of Turkish restaurants and kebab shops I encountered, because (historical animosities notwithstanding) the city has a well-established Turkish community. There are people of many ethnic backgrounds living and working there. In a café one day I had lunch beside a tableful of young Indian men, all tucking into bowls of goulash; perhaps they work for one of the tech companies in the city.

Budapest also has one of the biggest – and safest – Jewish communities in Europe, with 20-plus synagogues (including Europe’s largest, the Great Synagogue at Dohany Street) and regular cultural events. In the city centre I passed a huge banner proclaiming: ‘Happy Rosh Hashanah!’ When do you suppose we might see such a prominently displayed greeting to the Jewish residents of, say, London?

There has been an annual gay pride march in Budapest since 1997, as part of a week-long lesbian, gay, bisexual and trans-gender cultural festival. Budapest’s nightlife is as lively (and racy) as that found in any other Western capital, its artistic life is rich and varied – everything from Shakespeare to Joe Orton, grand opera to pop concerts (Frank Zappa and his ‘Grandmothers of Invention’ were appearing the week I was there).

In short, Hungary truly belongs at the heart of liberal, modern Europe. Yes, the bigoted far-right Jobbik Party is fairly well-represented in Parliament. Fortunately, Orban’s Fidesz Party has such a thumping majority he doesn’t need their support.

So whatever the bullying bureaucrats in Brussels have to say – even as we witness the predictable backlash to Germany’s open-door policy – I won’t join in the chorus of disapproval at Hungary’s position on the migrant crisis. It has a right to determine its own national destiny, after being denied it for so long.

Although I was a small child when I left Budapest and have spent most of my life in my adopted home of London, I’ve never stopped loving my birthplace. On every visit I sense again the ingrained melancholy of the place, stemming from its sad history. Wars, occupations, revolutions. So much spilt blood.

But there is an equally embedded defiance, too. For me, it’s symbolised by the dilapidated 19th century buildings in parts of the old city, still pock-marked with bullet holes, their once-ornate facades now crumbling. In any wealthy capital they would have been condemned long ago. But in Budapest, there are lights shining in upstairs windows and the ground floor hosts a cool pop-up bar.

Now, how can you not love a place like that?