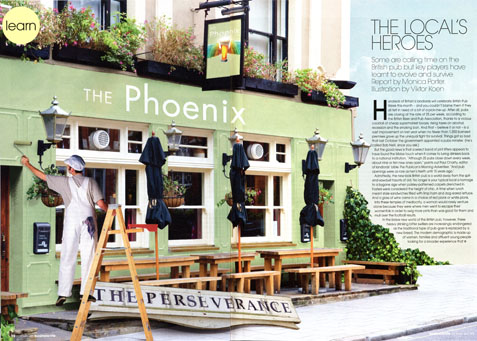 Some are calling time on the British pub but key players have learnt to evolve and survive.

Hundreds of Britain’s landlords will celebrate British Pub Week later this month – and you couldn’t blame them if they all felt in need of a bit of a pick-me-up. After all, pubs are closing at the rate of 25 per week, according to the authoritative British Beer and Pub Association, thanks to a vicious cocktail of cheap supermarket booze, rising taxes on alcohol, recession and the smoking ban. And that – believe it or not – is a vast improvement on last year when no fewer than 1,300 licensed premises gave up the unequal fight for survival.

But the good news is that a select band of pint lifters appear to have found the Midas touch when it comes to luring drinkers back to a national institution. “Although 25 pubs close down every week, about nine or 10 new ones open,” points out Paul Charity, editor of landlords’ bible The Morning Advertiser. “And pub openings were as rare as hen’s teeth until 15 years ago.’

Admittedly, the new-look British pub is a world away from the spit-and-sawdust haunts of old. No longer is your typical local a homage to a bygone age when paisley-patterned carpets drenched in Fosters were considered the height of chic. A time when lunch meant stale sandwiches consisting of limp ham and dog-eared lettuce. And a glass of wine came in a choice of red plonk or white plonk. In these temples of mediocrity, a woman would rarely venture in alone because it is where men went to escape their womenfolk in order to swig more pints than was good for them and mull over the football results.

In the brave new world of the British pub, however, these heavy drinking bitter swillers are increasingly endangered as the traditional type of pub-goer is replaced by a new breed. The modern demographic is made up of women, families and affluent young people looking for a broader experience which encompasses coffee, wine, spirits, cocktails, world beers, food – and probably Wi-Fi.

One of the men at the vanguard of this new approach is a pub entrepreneur called Rupert Clevely. It is, perhaps, telling that Clevely served his apprenticeship in the drinks trade not in a British brewing hall but a French champagne chateau. He was global marketing director of Veuve Clicquot until 1995 when he decided he wanted a change from a life lived out of suitcases and rushing through departure lounges. That was the year that he and his wife Jo opened their first pub, the Chelsea Ram in southwest London.

As Clevely later explained: “Most pubs in London were dingy booze bars…I felt there was an opportunity to turn pubs into really lovely places that were warm and cosy and an extension of people’s homes.” It wasn’t long before the Ram was joined by several others and the Geronimo chain was born. Apart from the usual range of lagers and well-kept cask beers, it focused on providing interesting and unusual wines and freshly cooked, locally sourced food.

Meanwhile Jo, as Geronimo’s design director, created the welcoming look and feel of their pubs. Instead of grim flocked wallpaper and forbidding dark wood tables and chairs their pubs are light and airy places with bright, modern wall coverings, well-chosen knick-knacks and comfortable sofas.

Within three years, one of their acquisitions, the Duke of Cambridge in Battersea, was named Evening Standard Pub of the Year. Clearly, they were getting things right.

And so it proved. There are now Geronimo venues all over London – including the Bull at the Westfield Shopping Centre and the Betjeman Arms at the magnificently restored St. Pancras International train station – and a 300-year-old ‘country retreat’ in Blindley Heath, Surrey.

Business Life readers, meanwhile, may well be familiar with the Geronimo outlets at Terminal 5 at Heathrow.

Last year – the 15th anniversary of its foundation – Geronimo’s turnover was £18.4 million, a significant achievement in the face of the problems besetting the pub sector and ‘austerity Britain’. Asked why his pubs were doing so well when many others were failing, Clevely replied: “Pubs are a simple business. Everybody knows pubs are about great food, great wine, great beer, a lovely environment, nice loos and a decent cup of coffee. Everybody sets out to do that, they all have great ambition but they don’t actually deliver.”

By now, Geronimo’s success had caught the eye of the men at the top of one of the country’s biggest pub chains. Founded in 1831, Young & Co is one of the most powerful forces in the British hospitality business, with a portfolio of 250 pubs – all but 40 of them inside the M25. As key members of the beer and sandwiches brigade, Young’s management clearly saw something in the upstart Champagne Charlie with the wife with an eye for décor. Last December, Young’s bought Geronimo for £60 million and Rupert now sits on its board as an executive director and continues as managing director of the Geronimo portfolio, while Jo remains in control of its design strategy.

But Young’s CEO Stephen Goodyear insists it is wrong to view the Clevelys’ pubs as more up-market than Young’s own, more traditional brand. “Their interior design might be a bit more female-friendly, a little more modern in general,” he says. “Some of our pubs are perhaps not as ‘sexy’. But the two brands are operationally similar – both aim to provide good food, wine and service and a pleasant décor. Young’s pubs are 30 per cent food and 70 per cent drinks-led, while the Geronimo split is 40 per cent and 60 per cent. A slight difference. But the prices are the same.”

And Goodyear refuses to join in the general mourning for lost pubs. “Some villages were over-pubbed, while other areas had gone downhill and couldn’t support their pubs anymore,” he argues. “And the demographics in many communities have changed, with ethnic minorities moving in that don’t go to pubs.” In other words, life moves on and it’s pointless crying about it.

Of course, not everyone sees it that way. Some local communities have been so passionate about keeping alive their cherished watering hole that they have set up ‘co-operatives’ to take ownership of it themselves. The first pub to be bought co-operatively, in 2003, was the Old Crown in the fellside village of Hesket Newmarket in Cumbria. When the pub was set to close, 147 locals invested a total of £220,000 to buy it and keep it going. This followed a similar community buyout of the local brewery two years earlier, when villagers invested £130,000. Today the Old Crown serves real ales brewed by the Hesket Newmarket Brewery at the rear of the pub. Even Prince Charles has stopped in for a pint.

But this isn’t purely a rural phenomenon. In Salford, Greater Manchester, more than 60 residents clubbed together and invested £80,000 to buy their local pub, the Star Inn. Operating in a similar way to the Old Crown – with members on a committee and a paid management running day-to-day affairs – it is a profitable business. Recently, a micro-brewery moved into an adjacent building in order to brew special ales for the pub and The Star is about to celebrate its second anniversary as a co-operative with a beer festival.

“When a local pub is threatened with closure, there is often an opportunity for a community to form a co-operative and keep it going,” says Ed Mayo, Secretary General of Co-operatives UK, the trade association for co-operative enterprises. “It’s no general panacea, but if you’ve got residents who can see that a pub would succeed with an injection of local support, passion and enterprise, then co-operatives can provide a successful answer.” Mayo is right to say it’s a minority solution, though, as there are currently just nine co-operative pubs around the country.

Meanwhile, everybody’s favourite whipping boys, the politicians, don’t escape blame for the demise of this particular British institution. According to CAMRA, the Campaign for Real Ale, many pubs wouldn’t be under threat in the first place if the ‘fine words of support’ from legislators were translated into helpful legislation. “Every year excise duty on alcohol is raised by 2 per cent above inflation,” says Iain Loe, CAMRA’s research information officer. “It’s gone up by a massive 35 per cent since 2008. And then there’s VAT. France and Ireland have lowered VAT in the hospitality sector but our government keeps it at the full rate of 20 per cent. They seem reluctant to do anything which would decrease their revenue. And being under pressure from the health bodies – the ‘neo-Prohibitionists’ – to cut alcohol consumption, is another reason for keeping taxes so high.” The Publican’s Morning Advertiser is running a ‘Thrive on 5 campaign’ to lobby for VAT to be reduced to 5 per cent in the hospitality sector by 2014.

The supermarkets, with their cut-price alcohol and endless special offers, are another major thorn in the side for pubs. The average pint of lager in a pub now costs £3.05 and a pint of bitter is £2.60, but supermarkets often sell the equivalent at cost price – or even below cost price, as loss leaders – for as little as 50p-80p. Seasonal promotions, at Christmas-time, for example, bring prices down even more. The differentials have increased dramatically and people who once enjoyed drinking at their local now stock up on discounted supermarket booze to be consumed elsewhere.

Putting the squeeze even further on pub licensees are the contentious ‘tied commitments’ in their contracts, forcing them to buy their beer at a fixed price from their landlords as opposed to finding it more cheaply on the free market. Former pub owner Inez Ward of the pressure group Justice for Licensees is leading the fight to get this changed.

She declares: “We dream of a strong, united trade built on honesty, transparency and empathy for pubs and the people who run them.”

The days of the classic old boozer – immortalised by the Rover’s Return in Coronation Street and the Queen Vic in EastEnders – might very well be numbered. And that will sadden many. But like Big Ben, brass bands and the nice cup of tea, the British pub is not about to disappear just yet.

British Pub Week, a celebration of all that is great about the British Pub, runs from 28th October to 6th November. For details of events see www.britishpubweek.org.uk.