My partner Nick and I moved in together 11 years ago. After much searching we had finally found the proverbial dream house with everything we wanted: the plentiful space, the garden, the garage. What’s more, it was in a small gated community where the peace, privacy and security were a blessed relief after the constant noisy incursions on the inner-city streets where we’d been living. It became our haven.

Three years after settling into this wondrous North London abode I wrote an article for these pages praising the benefits of gated-community living. I’d begun to believe that it might difficult, after so ‘spoilt’ an existence, ever to live again on an ordinary street where anybody can just – oh the horror – walk right up to your front door. All in all, I wondered whether I could ever again find so wonderful a home.

Now I’m about to find out.

The dream that Nick and I had for ourselves of a happy-ever-after life together could not, in the end, match the dream house. Relationship breakdowns in the older age groups are on the rise, as we keep hearing, so I find myself smack in middle age and in the middle of the social statistics. Not that that’s any comfort. The stats don’t convey the pain involved, the regret and sense of failure.

Nick has moved out already, so I am now sole occupant of the home we once shared, but still co-own. It’s on the market, the agents’ boards are up. But selling a house and finding somewhere else to live normally takes months, as we all know. And simultaneously losing a partner and a much-loved home adds up to a double dose of stress.

Still, I’m lucky in one sense: a recent survey by the housing charity Shelter revealed that due to the rising cost of living in the capital, in particular the high price of housing, almost 130,000 people are forced to continue living with an ex-partner for financial reasons. While life is testing, it would doubtless be worse if Nick and I were still passing each other glumly on the stairs.

So here I am, a vendor with mood swings. At times I feel liberated. I can do anything I want! Dine on a peanut butter sandwich or read in bed until 3 a.m. There’s no one to disapprove. Then the aching knowledge returns that there is no one to have a laugh or a nightcap with, either. There’s only a house which is suddenly too big, too quiet and way too tidy – like an off-season B&B – and every corner of it is infused with memories of happier days.

I sit outside and reflect upon the ‘post-modern’ garden we designed the year after we moved in, complete with geometric gravel beds, raised pergola, bamboo border and trickling water feature with fish. Our garden was ‘small but perfectly formed,’ we used to tell visitors.

Only a few months ago Nick and I were wondering if there was some larger body of water to which we might relocate Big Daddy, the murky-coloured koi carp which had outgrown our little stone pond. To one of the ponds on Hampstead Heath, perhaps? Would it be allowed? We were still musing on it when our relationship came to a close, and I have to say it had never occurred to me that Big Daddy’s tenure at our home would outlast my own.

In one corner of the garden stands a lovely tall palm tree. I remember when we brought it home from the nursery, still small enough to stick in the boot of our car. We told each other that one day it would grow into a towering beauty and we’d sit beneath it on summer afternoons, sipping cocktails, to remind us of our first, romantic holiday together in St. Lucia. But somehow we never got around to that.

Inside, meanwhile, I peer briefly into what was Nick’s first-floor study. Once a cluttered hub of activity – shelves crammed with books and files, cabinets full of office paraphernalia, the messy desk, dual-screen computer and humming IT equipment – it’s now bare but for a few empty, abandoned ring binders on the floor. I keep the door closed.

The other rooms still contain some of Nick’s belongings. He left them behind, citing shortage of space in his present (rented) accommodation. This was foolhardy of him, as he knows full well what an inveterate thrower-out I am of un-used old stuff, especially other people’s. Indeed, in my hard-hearted moments I’ve already scooped up various bits and pieces and delivered them to the charity shop.

It’s unbearably sad when a relationship which promised – and for a long time delivered – so much, disintegrates. But I’m an optimist at heart and resolved to look forward, not back.  I am also pragmatic. My key task now is to sell our house and find another property for myself in London, inevitably someplace more modest.

One hears so much nowadays about ‘downsizing’. But it’s not just about size, is it? It’s also about having to forfeit some of the advantages one had begun to take for granted: the landscaped garden, the private parking, the en suite bathroom, the storage space, the (dare I say it) security gates. Or does one try to retain some of these assets and compromise on location instead – a nice property in a grottier area?

I don’t yet know what my answer will be, but when in perky mood I’m rather looking forward to creating a new personal space, as I did in younger years, as opposed to the common space one plans with a partner. It had been fun for the two of us to mesh our contrasting tastes and ideas into a single home (another subject I wrote about after we moved in together). But it might be equally satisfying to un-mesh myself and rediscover exactly what my own preferences and desires are.

In any case it will be a relief to get out of this ‘property limbo’. After a worryingly sluggish start in April, things seem to be picking up a little. At last the estate agents are bringing potential buyers and the feedback has been positive.

With luck an offer might not be far off. Then the next question is, where to live? My ideal would be a garden flat big enough for family visits, with a modern kitchen and (I can dream) some off-street parking, in a pleasant part of London. You wouldn’t, by any chance, have one to sell? 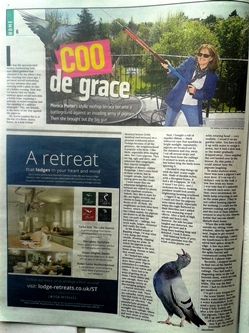