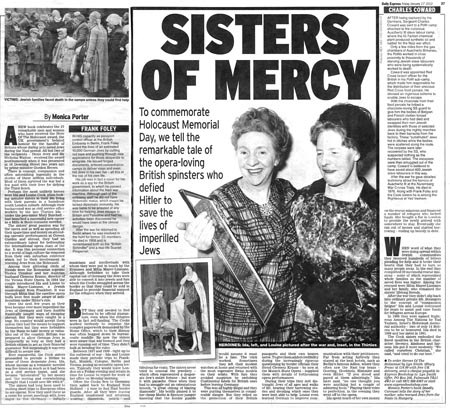 To commemorate Holocaust Memorial Day, we tell the remarkable tale of the opera-loving British spinsters who defied Hitler to save the lives of imperilled Jews

A new book celebrates the 27 remarkable men and women who have received the Hero of the Holocaust award, the UK government’s belated honour for the handful of Brits whose daring acts saved Jews during the Nazi period. All but two of the recipients – Denis Avey and Sir Nicholas Winton – received the award posthumously when it was presented at 10 Downing Street two years ago by the then Prime Minister Gordon Brown.

There is courage, compassion and often astonishing ingenuity in the stories of these selfless individuals. Most of them survived the war, but a few paid with their lives for defying the Third Reich.

Perhaps the most unlikely heroes were Ida and Louise Cook, plain-looking spinster sisters in their thirties, living with their parents in a humdrum south London suburb. Although their background was in the civil service, as modest office workers, by the late 1930s Ida – under the pen-name Mary Burchell – had launched into a successful new career as an author of Mills and Boon romantic novels.

The sisters’ great passion was for the opera, but as well as spending all their spare time and money on attending operatic performances at Covent Garden and abroad, they had an extraordinary talent for befriending the international opera stars of the day. And it was this personal connection to a world of high culture far removed from their own everyday, suburban existence which led to their involvement in rescuing Jews from the Holocaust.

Amongst their glittering circle of operatic friends were the Romanian soprano Viorica Ursuleac and her Austrian husband Clemens Krauss, director of the Vienna State Opera. In 1934 the couple introduced Ida and Louise to Mitia Mayer-Lismann, a Jewish musicologist from Frankfurt. It was through Mitia that the carefree opera buffs were first made aware of the growing anti-Semitism under Hitler’s rule.

Over the next few years, as their lives became ever more imperilled, the Jews of Germany, and then Austria, frantically sought ways of escaping abroad. But they were caught in a trap. No country would accept them unless they had the means to support themselves, but they were forbidden by the Nazis to take their money or valuables out of the country. Britain was prepared to allow German Jews in temporarily, as long as they had a British citizen to act as their financial guarantor during their stay here. Not surprisingly, it was very difficult to secure one.

Ever practical and resourceful, the Cook sisters now proceeded to provide a lifeline to some of these desperate Jews. Ida, whose income as a romantic novelist was five times as much as it had been as a civil servant typist, said she became ‘intoxicated’ by her money and ‘the moving and overwhelming thought that I could save life with it.’

The sisters had long been used to making short trips to European cities to see operas. Now they used these as a cover for secret meetings with Jews eager to flee Germany – initially musicians and intellectuals with whom they were put in touch by the Krausses and Mitia Mayer-Lismann. Although forbidden to take their capital out of Germany, the Jews were able to convert it into precious jewels and furs, which the Cooks smuggled across the border so that they could be sold in England to provide financial support for the refugees when they arrived.

But they still needed to find Brits to act as official guarantors, even when the refugees were in fact self-funding. The Cooks worked tirelessly to organise the complex paperwork demanded by the Home Office, which to their dismay was often bogged down in bureaucratic muddle and inertia. By now the sisters were aware that war loomed and they were running out of time. They didn’t balk at bending the rules.

Between 1937 and 1939 – right up until the outbreak of war – Ida and Louise made their periodic trips to Frankfurt, Munich, Cologne, Berlin and Vienna, posing as eccentric opera-lovers. Typically, they would leave London on a Friday evening and return in time for Louise to report for work at her office on Monday morning. Often the Cooks flew to Germany, then sailed back to England from Holland – a ruse to fool the Nazi border guards. After all, they were leaving England unadorned and returning wearing expensive diamonds and pearls and fabulous fur coats.

The sisters never tried to conceal the jewellery – which often represented some desperate Jew’s entire fortune – but wore them with panache. Once, when they had to smuggle out an ostentatious brooch, ‘a great oblong of blazing diamonds’, Ida boldly pinned it to her cheap Marks & Spencer jumper, knowing that the boarder guards would assume it must be a fake. The trick worked. Sometimes they left their own modest wristwatches at home and returned with the most expensive Swiss models on their wrists. With the furs they avoided suspicion by switching the coats’ Continental labels for British ones before leaving Germany.

Of course this was all highly illegal and they were putting themselves in considerable danger. But they relied on the protection of their British passports and their own brazen nerve.

To give them added credibility during the increasingly rigorous questioning by border officials, their friend Clemens Krauss – by now based at the Munich State Opera -supplied them in advance with details of forthcoming opera performances.

During their trips they met distraught Jews of all ages and from all walks of life, hearing their harrowing stories and deciding which ones they were best able to help. Louise even learnt fluent German so as to improve communication with their petitioners.

Far from acting furtively, they stayed at the best hotels, such as Berlin’s famous Adlon, where they often saw the Nazi top brass – Goering, Goebbels, Himmler, even Hitler himself on one occasion. ‘If you stood and gazed at them admiringly,’ Ida later explained, ‘ no one thought you were anything but another couple of admiring fools.’ Playing their roles to perfection, in the evening they strode off to the opera.

Ida spent much of her own money on the rescue missions and financed a number of refugees who lacked their own means of funding. She bought a flat in London to provide the newly-arrived with somewhere to stay. (Eventually she ran out of money and started borrowing; she ended up heavily in debt.)

As word of what they were doing spread within Jewish communities, they received hundreds of letters pleading for help and it broke their hearts that they had to turn so many people away. In the end they completed 29 successful rescue missions – some of which represented whole families, so the number of saved lives was higher. Among the rescued were Mitia Mayer-Lismann and her family, who remained the sisters’ lifelong friends.

After the war, they didn’t merely slip back into ordinary private life. Strangers to the concept of ‘compassion fatigue’, Ida and Louise continued for years to assist and raise funds for refugees across Europe.

In 1965 they were named Righteous Among the Nations by Yad Vashem, Israel’s Holocaust memorial authority – two of only 14 Brits to be so honoured. Ida and Louise Cook embodied the finest qualities inherent in the British national character: decency, kindness, fairness. Ida put it more modestly. ‘We called ourselves Christian,’ she said, ‘and tried to do our best.’

In his capacity as passport control officer at the British Embassy in Berlin, Frank Foley saved the lives of an estimated 10,000 German Jews by cutting red tape and pushing through visa applications for those desperate to emigrate. He issued forged documents, entered concentration camps to deliver visas and even hid Jews in his own flat – all this at the risk of his own life.

His job was in fact a cover for his work as a spy for the British government, to which he passed information about the Nazi war machine. Although part of the Embassy staff, he did not have diplomatic status, which meant he lacked diplomatic immunity. He was liable to be arrested at any time for helping Jews escape to Britain and Palestine, and had his spying activities been discovered, he would have been in the utmost danger.

After the war he returned to Berlin, where he was involved in the hunt for former SS members. He died in 1958 and is remembered both as the ‘British Schindler’ and a real-life Scarlet Pimpernel.

After his capture by the Germans, Sergeant Charles Coward was sent to a POW camp attached to the notorious Auschwitz III slave labour camp, where the I.G. Farben chemical plant produced synthetic oil and rubber for the Nazi war effort. Only a few miles from the gas chambers of Auschwitz-Birkenau, the POWs worked in close proximity to thousands of starving Jewish slave labourers being systematically worked to death.

Coward was appointed Red Cross liaison officer for the Brits in his POW sub-camp, which made him responsible for the distribution of their precious Red Cross food parcels. He devised an ingenious scheme to enable some of the Jews to escape. With the chocolate from their food parcels, he bribed a chocolate-loving SS guard to give him the bodies of Belgian and French civilian forced labourers who had died, and swapped their non-Jewish identities with those of selected Jews during the nightly marches back to their barracks from the factory. These ‘substituted’ Jews hid in ditches while the bodies were scattered along the route. The corpses were later recovered by the SS, who suspected nothing as the numbers tallied. The escapees were then smuggled out of the camp. Coward is believed to have saved about 400 Jewish slave labourers in this way.

After the war he gave detailed testimony about the horrors of Auschwitz III at the Nuremberg War Crimes Trials. He died in 1976. Along with Frank Foley and the Cook sisters, he is among the Righteous at Yad Vashem.