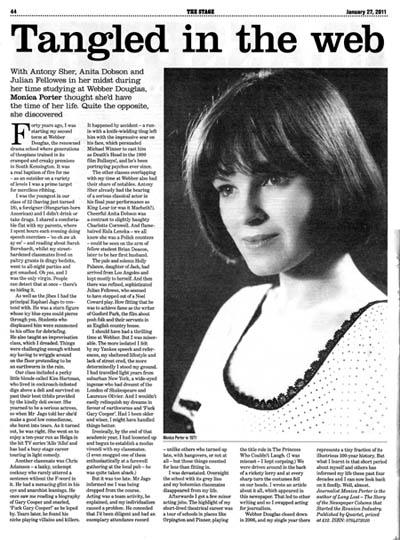 Tangled in the web

With Antony Sher, Anita Dobson and Julian Fellowes in her midst during her time studying at Webber Douglas, Monica Porter thought she’d have the time of her life. Quite the opposite, she discovered.

Forty years ago I was just starting my second term at Webber Douglas, the renowned drama school which trained generations of thespians in its cramped and creaky premises in South Kensington. It was a real baptism of fire for me: as an outsider on a variety of levels, I was a prime target for merciless ribbing.

I was the youngest in our class of twelve (having just turned eighteen), a foreigner (Hungarian-born American) and I didn’t drink or take drugs. I shared a comfortable flat with my parents, where I spent hours each evening doing speech exercises – ‘oo oh aw ah ay ee’ – and reading about Sarah Bernhardt, whilst my street-hardened classmates lived on paltry grants in dingy bedsits, went to all-night parties and got smashed. Oh yes, and I was the only virgin. People can detect that at once; there’s no hiding it.

As well as the jibes, I had the Principal, Mr. Jago, to contend with. He was a stern figure whose icy blue eyes could pierce through you. Students who displeased him were summoned to his office for ‘de-briefing’. He also taught an improvisation class, which I dreaded. Things were challenging enough without my having to wriggle around on the floor pretending to be an earthworm in the rain.

Our class included a perky little blonde called Kim Hartman, who lived in cockroach-infested digs above a deli and survived on past-their-best titbits provided by the kindly deli owner. She yearned to be a serious actress, so when Mr. Jago told her she’d make a good ‘low comedienne’, she burst into tears. As it turned out, he was right. She went on to enjoy a ten-year run as Helga in the hit TV series ‘Allo, ‘Allo!’ and has had a busy stage career touring in light comedy.

Another classmate was Chris Adamson, a lanky, unkempt Cockney who rarely uttered a sentence without the f-word in it. He had a menacing glint in his eye and anarchist leanings. He once saw me reading a biography of Gary Cooper and snarled ‘Fuck Gary Cooper!’ as he loped by. Years later he found his niche playing villains and killers. It happened by accident: a run-in with a knife-wielding thug left him with the impressive scar on his face which persuaded Michael Winner to cast him as Death’s Head in the 1990 film Bullseye!, and he’s been portraying psychos ever since.

The other classes, overlapping with my time at Webber, also had their share of notables. Anthony Sher already had the bearing of a serious classical actor in his final-year performance as King Lear (or was it Macbeth?). Cheerful Anita Dobson was a contrast to slightly haughty Charlotte Cornwell. And flame-haired Rula Lenska – we all knew she was a Polish countess – could be seen on the arm of fellow student Brian Deacon, later to be her first husband.

The pale and solemn Holly Palance, daughter of Jack, had arrived from Los Angeles and kept mostly to herself. And then there was refined, sophisticated Julian Fellowes, who seemed to have stepped out of a Noel Coward play. How fitting that he was to achieve fame as the writer of Gosford Park, the film about posh folk and their servants in an English country house.

I should have had a thrilling time at Webber. But I was miserable. The more isolated I felt by my Yankee speech and references, my sheltered lifestyle and lack of street cred, the more determinedly I stood my ground. I had travelled light-years from suburban New York, a wide-eyed ingénue who had dreamt of the London of Shakespeare and Laurence Olivier. And I wouldn’t easily relinquish my dreams in favour of earthworms and ‘Fuck Gary Cooper’. Had I been older and wiser, I might have handled things better.

Ironically, by the end of that academic year I had loosened up and begun to establish a modus vivendi with my classmates. (I even snogged one of them enthusiastically at a farewell gathering at the local pub; he was quite taken aback.)

But it was too late. Mr. Jago informed me I was being dropped from the course. Acting was a ‘team activity’, he explained, and my ‘individualism’ caused a problem. He conceded that I’d been diligent and had an exemplary attendance record – unlike others who turned up late, with hangovers, or not at all – but those things counted for less than ‘fitting in’.

I was devastated. Overnight the shabby little school with its grey lino and my bohemian classmates disappeared from my life.

Afterwards I got a few minor acting jobs. The highlight of my short-lived theatrical career was a tour of schools in places like Orpington and Pinner, playing the title role in The Princess Who Couldn’t Laugh. (I was mis-cast: I kept corpsing.) We were driven around in the back of a rickety lorry, and at every sharp turn the costumes fell on our heads. I wrote an article about it all, which appeared in this newspaper. That led to other writing, and so I swapped acting for journalism.

Webber Douglas closed down in 2006, and my single year there represents a tiny fraction of its illustrious 100-year history. But what I learnt in that short period about myself and others has informed my life these past four decades, and I can now look back on it fondly…well, almost.