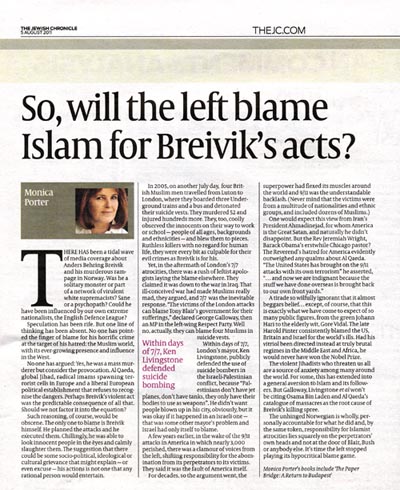 So, will the left blame Islam for Breivik’s acts?

There has been a tidal wave of coverage in the media about Anders Behring Breivik and his murderous rampage in Norway. Was he a solitary monster or part of a network of virulent white supremacists? Sane or a psychopath? Could he have been influenced by our own extreme nationalists, the English Defence League? Speculation has been rife.

But one line of thinking has been absent. No one has pointed the finger of blame for his horrific crime on the target of his hatred: the Muslim world, with its ever-growing presence and influence in the West. No one has argued: Yes, he was a mass murderer but consider the provocation. Al Qaeda, global Jihad, radical imams spawning terrorist cells in Europe and a liberal European political establishment that refuses to recognise the dangers. Perhaps Breivik’s violent act was the predictable consequence of all that. Should we not factor it into the equation?

Such reasoning, of course, would be obscene. The only one to blame is Breivik himself. He planned the attacks and he executed them. Chillingly, he was able to look innocent people in the eyes and calmly slaughter them. The suggestion that there could be some socio-political or cultural grievance which might mitigate his actions, make them somehow more comprehensible, is not one which any rational person would entertain.

In 2005, on another July day, four British Muslim men travelled from Luton to London, where they boarded three Underground trains and a bus and detonated their suicide vests. They murdered 52 and injured hundreds more. They, too, coolly observed the innocents on their way to work or school – people of all ages, backgrounds and ethnicities – and blew them to pieces. Ruthless killers with no regard for human life, they were every bit as culpable for their evil crimes as Breivik is for his.

Yet in the aftermath of London’s 7/7 atrocities there was a rush of leftist apologists laying the blame elsewhere. They claimed it was down to the war in Iraq. That ill-conceived war had made Muslims really mad, they argued, and 7/7 was the inevitable response. ‘The victims of the London attacks can blame Tony Blair’s government for their sufferings,’ declared George Galloway, then an MP in the left-wing Respect Party. Well no, actually, they can blame four Muslims in suicide vests.

Within days of 7/7, London’s mayor, Ken Livingstone, publicly defended the use of suicide bombers in the Israeli-Palestinian conflict, because ‘Palestinians don’t have jet planes, don’t have tanks, they only have their bodies to use as weapons’. He didn’t want people blown up in his city, obviously, but it was okay if it happened in an Israeli one – that was some other mayor’s problem and Israel had only itself to blame.

A few years earlier, in the wake of the 9/11 attacks in America in which nearly 3,000 perished, there was a clamour of voices from the left, shifting responsibility for the abomination from its perpetrators to its victims. They said it was the fault of America itself. For decades, so the argument went, the superpower had flexed its muscles around the world and 9/11 was the understandable backlash. (Never mind that the victims were from a multitude of nationalities and ethnic groups, and included dozens of Muslims.)

One would expect this view from Iran’s President Ahmadinejad, for whom America is the Great Satan, and naturally he didn’t disappoint. But the Rev. Jeremiah Wright, Barack Obama’s erstwhile Chicago pastor? The Reverend’s hatred for America evidently outweighed any qualms about Al Qaeda. ‘The United States has brought on the 9/11 attacks with its own terrorism,’ he asserted. ‘We bombed Hiroshima, we bombed Nagasaki, and we never batted an eye. We have supported state terrorism against the Palestinians and black South Africans, and now we are indignant because the stuff we have done overseas is brought back to our own front yards.’

A tirade so willfully ignorant that it almost beggars belief…except, of course, that this is exactly what we have come to expect of so many public figures – from the green Johann Hari to the elderly Gore Vidal. The late Harold Pinter consistently blamed the US, Britain and Israel for the world’s ills. Had his vitriol been directed instead at truly brutal regimes in the Middle East and Africa, he would never have won the Nobel Prize.

The violent Jihadists who threaten us all are a source of anxiety amongst many around the world. For some, this has extended into a general aversion to Islam and its followers. But Galloway, Livingstone et al won’t be citing Osama Bin Laden and Al Qaeda’s catalogue of massacres as the root cause of Breivik’s killing spree.

The unhinged Norwegian is wholly accountable for what he did, and by the same token responsibility for Islamist atrocities lies squarely on the perpetrators’ own heads and not at the door of Blair, Bush or anybody else. It’s time the left stopped playing its hypocritical blame game.