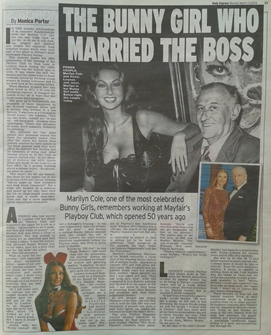 In the appropriately swanky surrounds of an exclusive Knightsbridge hotel bar, Marilyn Cole sips her tea and looks back on her life. At 66 she is still striking, elegant and spirited, and retains the signature long brunette tresses which were once part of her allure as Britain’s most celebrated Playboy Bunny.

This summer marks the 50th anniversary of the opening of the Playboy Club onPark Lane in London, which, during the Sixties and Seventies, was the hottest spot in town. It was where the rich, the famous and the titled went to drink cocktails served by fetching young women in bunny costumes and to try their luck at the gaming tables. When Marilyn stepped into this glitzyworld in 1971, a 21-year-old provincial ingénue, it changed the course of her life in ways she never imagined.

She grew up in Portsmouth, the youngest of three daughters to an ex-naval engineer father and a mother who worked in a bra factory. ‘I was born in a “Coronation Street house”,’ she explains. ‘Two up, two down, outside lav.’ It was in many ways an old-fashioned working-class upbringing: ‘There was discipline at home, good manners, definitely no swearing.’

She followed her two elder sisters into grammar school, as expected, but there the similarity ended. One after the other, her sisters were politely courted by their suitors in the front parlour until they went off to be married. But Marilyn had no intention of doing that. After leaving school at 16 she took on various clerical jobs – at the Ministry of Defence, the GPO, Lloyds Bank, and finally at the local Co-op fuel office, ‘in a grubby building above a railway depot – the gloomiest place on earth’. This wasn’t the life she wanted. She lived for her nights out at the local jazz clubs and discos, wearing ‘full-on make-up, false eyelashes and long black hairpieces’. For a while she worked as a waitress and saved up her tips, then blew the lot on thigh-length snakeskin boots and a suede mini-skirt. Then one day a more appealing career opportunity beckoned.

A friend who had moved to London told her about the Playboy Club and suggested she apply for a job as a Bunny – ‘all you have to do is smile, and they pay loads of money’ – so Marilyn duly sent them a letter of application. She was invited to London for an interview and told to bring a bikini. ‘I met the beautifully groomed Bunny Mother, put on my bikini, gave her a little twirl and the “big smile” she asked for.’ She was accepted.

What on earth did her parents – and especially her strict ex-military father – make of her new job? Marilyn explains: ‘In our house sex was never mentioned and nudity didn’t exist. I never even saw my sisters naked, although we’d all shared a bedroom! But my dad  was open-minded and not one to care what the neighbours thought. So I left home with my suitcase and the cooked chicken my mother gave me and got on the train to London. As we chugged past the sooty fuel office where I’d worked, for £12 a week, I waved goodbye. I knew it would be for good.’

Armed with her ‘Bunny manual’, she did a fortnight’s training – ‘it was very regimented, with lots of rules, like the army’ – and became a cocktail Bunny. Almost immediately she caught the eye of Victor Lownes, the super-wealthy American mastermind behind the Playboy clubs, who lived in lavish style in Mayfair. Known as ‘UK One’, he was Hugh Hefner’s right-hand man and the quintessential playboy, sharing his boss’s penchant for beautiful women and glittering parties. ‘A playboy,’ he once remarked, ‘is someone who gets more sex than you.’

Lownes reckoned Marilyn could be a Playmate of the Month for Hefner’s Playboy Magazine – the coveted nude centrefold picture – and arranged for a test photo shoot. Rival magazine Penthouse had started to publish full-frontal nude pictures, so in order not to lose out in the‘pubic wars’, Hefner chose Marilyn as Playboy’s first full-frontal nude. Whisked off to Playboy HQ in Chicago, she stayed at the famed Playboy mansion and met ‘Hef’, who was so captivated he wasted no time in adding her to his bevy of girlfriends. Their goings-on at the mansion, she says, ‘make Les Liaisons Dangereuses look like the Teletubbies’.

Marilyn’s trailblazing Playmate of the Month centrefold, a classy shot of her standing before shelves full of antique books – appeared in January 1972 and sold seven million copies. She wondered how her parents would react but needn’t have worried. ‘Mum ignored the fact I was naked and said “Your hair looks nice, dear”, while dad compared it to a Rubens painting and showed it to his mates at the pub. I was saved by their being so accepting. Some other Bunnies had problems with their more judgemental families.’

In 1973 Marilyn was named Playmate of the Year– the only Brit ever to hold the title. She was paid thousands of pounds and presented with a pink Volvo sports car (which she returned because she didn’t drive).

This year Playboy Magazine reached another milestone by publishing its final pictures of nude women. Playboy CEO Scott Flanders considers them passé, because: ‘You’re now one click away from every sex act imaginable for free on the internet.’ The naked star of the first issue, in 1953, was Marilyn Monroe. The end-of-an-era January/February 2016 issue featured Pamela Anderson.

London’s original Playboy Club closed down in 1981, when the British authorities revoked its gaming license due to its being a ‘foreign-controlled’ casino, and as a result, Hefner sacked Lownes. The loss of revenue to the Playboy empire was so massive it nearly collapsed.

‘It had been a wonderful place to work,’ recalls Marilyn. ‘We were like a family, we felt safe, it was liberating. My closest friends today are still the people I worked with at Playboy.’ And then there were all the famous personalities she got to know through the club: Tony Curtis, Lee Marvin, Sammy Davis Jr., Woody Allen, Warren Beatty…the list goes on.

By the time of the club’s closure Marilyn had been in a relationship with Victor Lownes for several years, and in 1984 they married. She was 34, he was 56. ‘I’d never wanted to marry anyone else. I always knew it would be him or nobody.’ Even the most assiduous playboy, it seems, is capable of settling down at last. I ask Marilyn why she thinks he chose her, out of the innumerable lovelies perpetually available to him? ‘Maybe because I loved and respected him as he was, an alpha male, like James Bond. I didn’t try to change him and wasn’t demanding.’

Three decades on, they are still happily married, living in their sumptuous house in Belgravia. Lownes went on to other successful business ventures after Playboy and the glamorous lifestyle continued. Today he and Marilyn are close to the two children from his early first marriage, his grandchildren and great-grandchildren. A touchingly traditional happy ending to a most unconventional ride through life.