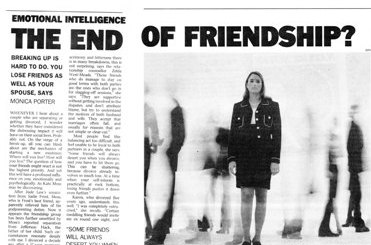 The end of friendship?

Whenever I hear about a couple who are getting divorced, I wonder whether they’ve considered the distressing impact it will have on their social lives. Probably not. On the verge of a marital break-up, all you can think about are the mechanics of starting a new existence: where will you live? how will you live? The question of how your friends might react to the situation is not of the highest priority. And yet it will, before long, have a profound influence on you, emotionally and psychologically.

This subject resonates deeply with me. I got divorced  a decade ago after a 17-year marriage. The friends my husband and I had seen most often throughout those years had come about mainly through him. A partner in a major law firm, he was always mixing with clients, lawyers and other City types; it was easier for him to forge social contacts than me, working on my own at home and raising our children. When we split up, he took these friends with him. He was the one who retained their sympathy and support.

I remember thinking: that’s fine, they were never really close to me, I was just the accepted adjunct. Good riddance.

Then suddenly it hit me. I was in a social void, and it was a terribly lonely place. One Saturday night I sat alone with a glass of wine on the balcony of my flat, watching couples stroll by on the street below, arm in arm, on their way to the local wine bar. I was utterly miserable.

Gradually, through my new life, I made new friends. And unlike before, they were undoubtedly my friends. But that period of transition was painful.

Most people I know have been through a divorce, or separation from a long-term partner. And while the circumstances of these relationship breakdowns can vary greatly, the concomitant loss of friendships seems almost universal.

According to relationship counsellor Zelda West-Meads, this is unsurprising, considering how much acrimony and bitterness there is in many breakdowns. ‘Those friends who do manage to stay on good terms with both parties are the ones who don’t go in for the “isn’t he awful, isn’t she unreasonable” slagging-off sessions’, she says. ‘They are supportive without getting involved in the disputes, and don’t attribute blame, but try to understand the motives of both husband and wife. They accept that marriages often fail, and usually for reasons which are not simple or clear-cut.’

She adds that, unfortunately, most people find this balancing act too difficult, and feel unable to be loyal to both partners in a couple. ‘Some friends will always desert you when you divorce, and you just have to let them go. This can be shattering, because divorce already involves so much loss of  various kinds, the last thing you need is to lose good friends, as well. At a time when your self-esteem is practically at rock bottom, this pushes it down even further.’

Karen, who divorced five years ago, understands this syndrome well. ‘I was completely ostracised,’ she recalls. ‘Certain meddling friends would invite my ex ‘round one night, and invite me ‘round the next. I knew he was winning them over to his side, but they were also curious to hear what I had to say. It was all some sort of game, which I didn’t want to play. As a result I lost contact with them.

‘Also, my ex’s male friends stopped their other halves from talking to me. As I was the one to initiate the divorce, they considered me a bad person, and worried that I might influence their women. One of my ex’s single mates, on the other hand, asked me out. He was nice and I fancied him. But I knew that whatever happened between us would get back to my ex, so I turned him down and never saw him again. Shame.’

Lucy got married at 21 to an older, paternalistic and controlling husband. When her marriage finally ended 27 years later, she was turned into a virtual social pariah: ‘My husband had always discouraged me from making my own friends and going out without him, so our social circle was formed almost entirely by him. I left him in the end, as I felt so hemmed in and unhappy, but inevitably our friends saw me as the guilty party and him as the victim. They rallied round him, while I became persona non grata.

‘You want your friends to be non-judgemental and to understand you, but then you realise that they can’t or won’t. They like things to be neat and tidy, with the right number at dinner parties, etc. Well, divorce isn’t neat or tidy, it unsettles people. Nobody wants a loose cannon at their social gatherings; it’s easier to leave you out. It’s a cliché, but you really do find out who your friends are. You discover that the majority weren’t friends at all, just people you socialised with.

‘Others are overwhelmed by the trauma of it. One couple to whom we were particularly close couldn’t cope and abandoned us both. They grieved over us as if we’d died. And a close girlfriend of mine felt forced to drop me because her husband was so appalled by what I had done. Her loyalties were torn, and understandably she stuck with her husband.’

Of course, there is the occasional surprising exception. Since Sandra and her husband Gerald split up seven years ago, she has had no trouble staying close to their good friends Bob and his wife – despite the fact that the two men were old chums from schooldays. ‘If Bob didn’t dump me like other friends it’s  precisely because he has known Gerry all his life,’ Sandra explains. ‘He knows what a jerk he can be.’

Zelda West-Meads believes that men generally have an easier time socially, post-divorce, than women. ‘They are fussed over by female friends with their maternal instincts, who think: poor dears, they can’t cook or look after themselves. So they get plenty of dinner invitations. Divorced women, on the other hand, just meet their friends for lunch.’

Women might tend to get the rougher deal, but one recently divorced man with grievances in this area is James. ‘My ex-wife is very possessive of her friends,’ he says, ‘and she won’t let me see them. I really like some of her girlfriends and get on well with them. But if I meet one for lunch or a drink, my ex demands to know what I’m “up to”. Am I trying to undermine her? Or am I hoping, perhaps, to get off with them? Embarrassed, her friends end up avoiding such situations by not seeing me.

‘Funnily enough, she has no compunction in socialising with my friend Ted, who I’ve known since we were at college together 40 years ago and who she met through me. She invites him to dinner parties as a useful “spare man”. One evening I wandered into a restaurant near my home and saw the two of them having dinner together. My ex turned red and got tremendously defensive, protesting that they were only having a meal, as if I might assume they were going to bed together afterwards. We’re all in our early sixties, for goodness’ sake!

‘The episode gave me the odd feeling that Ted was being disloyal to me. If I don’t want to be with my ex, what’s he doing with her? Can’t he see what a pain in the neck she is?’

Not everyone, however, thinks it’s a bad thing to ‘divorce’ their ex-partner’s friends. Some, like Patricia, even regard it as an essential prerequisite to moving on: ‘When Dan, my long-term partner, left me for his secretary (how banal) I was devastated, but quickly realised that I had to cut him out of my life completely. Once I’d destroyed the letters,  threw out the presents and stopped taking his calls, I was relatively fine…until I saw our mutual friends. Then his name would come up and I’d go to pieces again. So the next logical step was to stop seeing them, too. Obviously this only applied to people I’d met through Dan and had grown fond of. Frankly, I think they found my presence embarrassing anyway – they weren’t difficult to shake off. And it did mean I could move forward more quickly than I would otherwise have done. Sometimes the best method of self-preservation is to cut loose.’