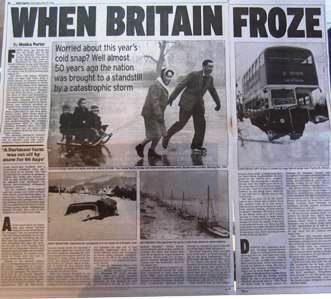 Fifty years ago this month Britain fell into the arctic grip of one of its bitterest winters on record. What became known as the Big Freeze began on 22 December 1962 and continued without let-up until 6 March – ten weeks of crises and suffering throughout the country, which took its toll in both human and animal life.

Not since 1740, during Britain’s ‘little ice age’, had there been a colder winter. In January temperatures plunged to -19.4 C  in Sutherland, while Braemar recorded a low of -22.2 C. Cars were driven on the River Thames, the sea froze for up to a mile from the shore in Kent, and blizzards in the southwest brought snowdrifts 20 feet deep, bringing down power lines and wreaking transportation chaos. Sheep and bullocks perished as farmers were unable to reach them through the snow.

At least fifty people lost their lives because of the weather. Some suffocated in cars that were buried under drifts. Some died of gas poisoning when the frost burst mains pipes. Others set out on foot and underestimating the freezing temperatures, died of exposure. Children drowned when they fell through the ice on frozen lakes and rivers, weighed down by their thick winter clothes.

The Medical Research Council advised the public on how to survive in extreme cold. The ‘ideal wardrobe’ was a string vest underneath loose-knit woollens and a waterproof, insulated outer garment such as an anorak. The legs should first be covered by pyjamas, tucked into socks, and women as well as men should wear trousers, as exposed legs developed the patchy discolouration nicknamed ‘granny’s tartan’.

On the railways, diesel engines and fuel, points and water-troughs were frozen, immobilising trains on many lines. There was a shortage of locomotives and carriages at terminal stations and those trains that did run added several hours to their normal journey times. Railwaymen burned all-night fires next to engines to stop them icing up.

There was disaster on the roads, too. As the snow piled up, buses, cars and lorries became stuck and were abandoned. On 2 January the AA reported that ‘the only thing travelling up the M1 is snow’ and the following day the RAC said the impassable Peak District resembled the Alps. By 20 January only six of the 86 counties had roads free of stranded vehicles and blizzards had virtually cut Scotland off from England. In London hundreds of buses were put out of action when their fuel froze.

Adding to the general misery were the frequent power cuts which left many – specially in London, the Home Counties and the South – in the cold and dark. The blackouts were due to the record demand for electricity, but the situation was made much worse by a pay dispute waged by electricity workers. When negotiations with the Electricity Council  broke down on 4 January the unions called for a work-to-rule at power stations, banning all overtime despite the urgent need for the stations to keep going around the clock. The dispute ended on 16 January but the unions, angry at having to settle for less money than they wanted, prolonged their overtime ban for several more days.

With the nation being brought to its knees, Prime Minister Harold Macmillan convened a special meeting of Cabinet to discuss emergency measures. But the government couldn’t legislate its way out of this Siberian nightmare…

One of the worst affected areas was Dartmoor in Devon, where the small farming communities were quickly cut off by the snow. From Boxing Day to early March all roads were closed, all vehicles abandoned. ‘It was like Victorian times. You walked everywhere,’ local resident Jimmy Martin recollected in the 1996 Granada TV series Savage Skies. ‘But the snow brought people together. You knocked on windows as you passed by and got invited in for tea. It was wonderfully friendly.’

Other locals observed how silent it was outdoors because the birds – especially the smaller species – froze and starved to death in unprecedented numbers. And shops sold out of sunglasses because people had trouble with the unaccustomed glare of the landscape.

At Dartmoor Prison inmates not normally allowed outside the prison walls were permitted to go out and help clear the snow. With such life-threatening weather conditions, there was little danger of escape attempts. Instead, they occasionally downed their shovels to engage in good-natured snowball fights with youngsters.

Essential supplies were brought in by helicopter, as Sarah Knight, a young girl at the time, remembers: ‘One helicopter landed in the field next to us, which was great fun. They brought flour and bread and butter, and meat which was frozen solid and had to be cut up with a saw. It must have been hell to be an adult but it was great being a child then. Out here when you talk about snow, you always talk about ‘62-63.’

Paul Carfoot was ten years old that winter, living in Stapenhill, a village near Burton-on-Trent, Staffordshire. He was glued to the BBC’s daily weather forecasts. ‘By January the cold was so intense that the water pipes froze in the road and we had no more water,’ he recalls. ‘And the snow had drifted halfway up the living room windows, so my dad had to dig his way to the coalhouse.

‘We had to melt ice in the kettle just to get a drink and couldn’t flush the outside toilet, as it was frozen. Like most people those days we didn’t have central heating, double-glazing or electric blankets. We just had a coal fire in the living room and we’d huddle around it every night to keep warm. On waking most mornings I’d have to scrape ice from the inside of my bedroom window to see out. Even my fish tank froze. One night my dad chucked his hot water bottle out of bed because it had gone cold and the next morning it was frozen solid on the floor.’

He adds that, amazingly, despite the ceaseless snow and freezing temperatures, his school never once closed, although they all wore hats and coats during lessons. Carfoot became ‘totally hooked’ on the weather as a result of that unforgettable winter and says he is just as fanatical today. He runs a climate and weather station from his home, not far from Stapenhill.

Roger Cullingham has equally sharp memories of the Big Freeze, during which he was a 15-year-old pupil at Windsor Grammar School: ‘The thick ice from bank to bank across the Thames at Windsor turned our thoughts to ox roasts and frost fairs as depicted in paintings from earlier centuries. My schoolmates and I played bicycle hockey on the river, despite the danger of falling through the ice.’

His father Gordon, Windsor’s Deputy Borough Engineer, kept a diary in which he recorded the consequences of the weather – the rise in food prices, the ravenous birds, the council’s desperate attempts to stop the waterworks turbines from freezing by installing aircraft heaters borrowed from nearby Heathrow Airport.

Roger recalls the many fires caused by old oil heaters pressed back into service by people who didn’t know how to use them safely: ‘Fires were started either when a heater was knocked over or refilled whilst alight, or left unattended in a loft in an attempt to defrost frozen plumbing. In any event the fire brigade were kept busy!’

Predictably, the winter also brought massive disruption to sports. With no under-soil heating in those days, frozen football and rugby pitches led to the cancellation of nearly a thousand matches and many clubs could play no competitive matches for nearly three months. The turf fared no better, with 94 horse races cancelled. There was no racing in England between 23 December and 7 March.

On 2 March troops relieved a farm on Dartmoor that had been cut off by 20-foot snowdrifts for 66 days. And at long last, on the morning of 6 March, the country woke to its first day without frost anywhere. Temperatures rose sharply to 17 C, the snow started to melt, it rained heavily…and then the floods began, bringing troubles of another kind.