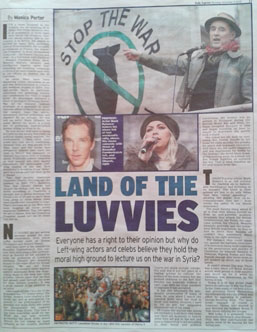 Why do Leftie luvvies believe they have a right to lecture us on Syria?

It’s a tense moment in the country. Should we bomb Isis in Syria? Our Prime Minister – who is in possession of more hard facts about the situation than just about anyone else in the country – is in favour. His stance is backed by a majority of MPs (including Labour front benchers), the Socialist government of France, the American President (a most un-hawkish Democrat), the United Nations, and even – in a real break with tradition – Russia’s President Putin. Most Western military, security and intelligence experts agree that extending the bombing campaign to Syria is an unavoidable next step in our overall efforts to destroy the Isis terrorists.

But as usual, there have been dissenting voices. Attendees at an anti-war demonstration in London last weekend begged to differ. One high profile figure, in particular, addressed the gathering volubly and condemned the ‘rush to bomb Syria’. He afterwards delivered a letter of protest to Downing Street. Was he an eminent military strategist, perhaps, or a specialist in international affairs, to know more about this subject than the above mentioned elected politicians and experts? Er, no actually. He was just an actor. Mark Rylance, by name. Merely the latest in a long line of posturing, loud-mouthed luvvies telling us what to do.

By now we are well used to being lectured by the acting fraternity on political issues, social matters, the environment – they stick their noses into just about everything. Because they are well-known from films and plays, the Press and media, they arrogantly believe they have the right to hector and harangue on matters they know little or nothing about. Politically correct creatures as they usually are, they mostly just regurgitate the fashionable left-wing dogma of the day. How wonderful it would be if our ‘slebs’ gave us a break and just shut up for a change.

Take that mouthy Welsh chanteuse, Charlotte Church. Not long ago she claimed on BBC TV’s Question Time that climate change had caused the Syrian civil war. In the world according to Charlotte, a drought due to global warming had forced a lot of people to move from rural areas to cities, where there were insufficient resources to cope.  That’s because we in the West have been hogging all those lovely resources ourselves. Yup, yet again we are to blame. Not the tyrannical President Asad, not the Isis death cult, but us. No doubt she got several brownie points for that observation from fellow leftie luvvies such as Emma Thompson and Russell Brand.

And then there is the ubiquitous Benedict Cumberbatch. Not content with delivering a fine performance as Hamlet, he felt entitled to bully his audiences at London’s Barbican Theatre into donating money to the relief effort for Syrian refugees. ‘We are not doing enough!’ he scolded these hapless captive audiences from the stage, urging them  to dig deep into their pockets. (Never mind that his fans had already paid through the nose for their theatre tickets.) It was a gross misuse of his platform as an actor.

Like many people, I’m a fan of the Scandinavian TV thriller series, The Bridge. Season 3 started a few weeks ago and as anticipated, I’m riveted to the performance of its Swedish star Sofia Helin, who plays the idiosyncratic but inspired detective Saga Noren. This time, however, it has been somewhat spoilt for me. While she was here recently promoting the show, Helin slated Britain for not taking as many refugees as her own country. Another ‘you’re not doing enough’  rebuke. Not only was it not her place as a visiting actress to criticise the politics of the host country, but she seemed oblivious to the fact that Sweden has belatedly realised it can’t cope with the huge numbers of migrants it has accepted. It has also witnessed the anti-Semitic propensities of many of them, with Jews being attacked on the streets. Not surprisingly, that stuff isn’t shown in The Bridge.

So now when I watch the talented Helin strut her stuff in those cool leather trousers she wears, I have to try to put her misguided utterances out of my mind. Arrogant and condescending thespians, from both here and abroad, can be their own worst enemies.

Of course, like anyone else, actors are entitled to hold their own views, and there are moments in history when they are put to the test and have a chance truly to act according to their moral and political convictions. My mother was an actress in Budapest during the Second World War and when the Nazis occupied Hungary in 1944 and began rounding up the Jews in order to deport them to Auschwitz, she quietly took an admirably principled stand. She risked her life, daily, by secretly sheltering five Jewish friends in her home for eight months, the penalty for which was summary execution. And when she finally fell under suspicion and was imprisoned for weeks by the Gestapo, she faced them down, giving nothing away. As a result, her five Jewish fugitives all survived the war. That is what standing up for your beliefs looks like.

Today’s gobby actors, Mark Rylance et all, risk nothing by climbing on to fashionable bandwagons and lecturing us on morality. The truth is, their actions are less to do with virtue than with ‘virtue signalling’ – showing the public how oh-so-compassionate they are – from within the safety of our liberal democracy.

The most hateful thing about it all is that they always lecture us from an anti-patriotic position. Invariably they attack the British establishment, the Tories, the capitalist system, the Church, Western interests generally, the indigenous British population. I mean, as they so love to shoot their mouths off, couldn’t they sometimes shoot them in the right direction? For instance, they could speak out against the barbaric treatment of women in so many Arab countries, or the persecution and murder of Christians by Islamist fanatics in Pakistan, Nigeria, Sudan, Iraq, etc.

Or closer to home, why not rail against the spineless local authorities and police forces that allowed underage English girls to be groomed as the sex slaves of Pakistani gangs in Rotherham and elsewhere? Also taking place– right under our noses – are forced marriages and countless cases of FGM. But funnily enough, you never hear the likes of Charlotte Church and Benedict Cumberbatch getting worked up about any of those issues.

It wasn’t always this way. It’s hard to remember now, but there was a time when our finest British actors were proud of their country and stood up for it when its existence was threatened by the forces of evil. Today it is Isis and global jihad. Seven decades ago it was the Nazis. In the 1940s many of our best actors and actresses threw themselves wholeheartedly into the British war effort by appearing in patriotic, morale-boosting films. The most iconic example, of course, is Laurence Olivier, who starred and directed in the brilliant Henry V. Talk about rallying the troops!

Well, today it is genuinely ‘once more unto the breach, dear friends’.  Only this time, sadly, our actors seem to be batting for the wrong side.