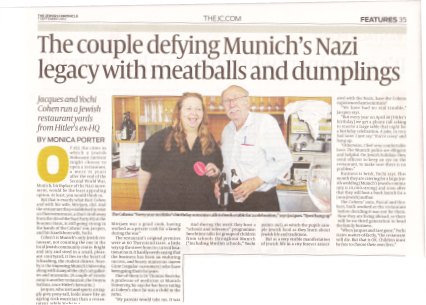 Of all the cities in which a Holocaust-surviving Jew might choose to open a restaurant – a mere 15 years after the end of the Second World War – you’d think the least appealing option would be Munich, birthplace of the Nazi movement. But Jews are endlessly surprising folk. For that is exactly what Kurt Cohen did, together with his wife Mirijam. And the eatery they established in 1960 on Theresienstrasse, a short stroll away from the site of the Nazi Party HQ at the Braunes Haus, is still going strong in the hands of the Cohens’ son Jacques and his Israeli-born wife Yochi.

I went to meet them on a sunny afternoon during my recent visit to Munich. Cohen’s is a bright, airy restaurant in a small courtyard in the heart of Schwabing, the student district. Nearby is the imposing Munich University, along with many of the city’s art galleries and museums. (A couple of streets away is another restaurant, the Osteria Italiana, once Hitler’s favourite. But the proximity is of scant concern to the Cohens.)

Jacques, who is 65 and sports a straggly grey pony-tail, looks more like an ageing rock musician than a restaurateur, while Yochi is a full-bodied redhead with an impish sense of humour. They met in Israel in 1973, during the Yom Kippur War; Jacques was there as a volunteer to help in the war effort. The following year they married and Yochi joined her husband in Munich, with no qualms at all…although her mother had been an inmate at Belsen. ‘I’m a cosmopolitan person,’ she says, by way of vague explanation.

But this is to jump ahead in the story, which begins with Kurt Cohen, scion of a Hamburg-based Jewish family which can trace its roots back to the 17th century. Kurt was a 22-year-old university student, fluent in English and French as well as German, when Kristallnacht shattered the remaining hopes of German Jews that they could ride out the Nazi storm. He smuggled himself onto a ship and ended up in Antwerp, where he secured forged documents and met Mirijam, also living in Belgium with forged Christian papers. They married in 1942 and survived the rest of the war in Belgium, returning to Germany together in 1948.

After staying in various displaced persons camps, they settled in Bavaria and in 1955  moved to Munich, where, a few years later, they opened Cohen’s. Why a restaurant? I ask. Had Kurt been working in the catering business? No, Jacques replies. It was because Mirijam was a good cook, having worked as a private cook for a family during the war.

The restaurant’s original premises were at no. 60 Theresienstrasse, a little way up the street from its present location at no. 31. It hardly needs saying that the business has been an enduring success, and boasts numerous stamm gäste (regular customers) who have been going there for years.

One of them is Dr. Thomas Ruzicka, who is lunching with friends when I arrive. A professor of medicine at Munich University, he’s been eating at Cohen’s since he was a child in the 1970s and ‘80s. ‘My parents would take me. It was a social gathering place for them, not just a restaurant. They would meet their friends, play cards.’ Now Thomas brings his own companions there for meals – Jews and non-Jews alike. ‘My parents are no longer alive but I’m continuing the tradition.’ At his table sit visiting friends and medical colleagues from Slovakia, the Czech Republic and Israel.

Has he any favourite dishes at Cohen’s? ‘I like Eastern European food,’ Thomas answers. ‘And here you can get the best Wiener schnitzel in town.’ Yochi, hovering nearby, flashes me a proud smile. ‘Yes, that’s true.’ She explains that they serve ‘kosher-style food – traditional but secular’. So, a pork-free zone but no kosher kitchen as such, ‘because we would have to pay for a mashgiach and that’s expensive.’

In any case, 90% of their customers are non-Jews. At another table a young Spanish couple on holiday – Carmen and Miguel, from Madrid- are poring over the menu. The gentile pair didn’t even know Cohen’s is Jewish, they just chose it because it’s described in their guidebook as offering good value for money and is well-situated for the galleries they plan to visit.

Mirijam passed away in 1990 and Kurt in 2006. Jacques and Yochi have been running Cohen’s -Munich’s only Jewish restaurant, not counting the eatery in the Jewish community centre – for the past 14 years. And they have added an educational aspect to it. They run Sunday ‘lunch and lecture’ events, at which Dr. Michael Heinzmann of Munich University speaks on topics relating to Jewish culture whilst his audience munches on pirogi and Königsberg meatballs. And during the week they host a ‘schools and tolerance’ programme: lunchtime talks for groups of children from schools throughout Munich (‘including Muslim schools,’ Yochi points out) at which the pupils sample Jewish food as they learn about Jewish life and traditions.

As regards tolerance, have the Cohens experienced anti-Semitism in the city forever associated with the Nazis? ‘We have had no real trouble,’ Jacques says. ‘But every year on 20 April [Hitler’s birthday] we get a phone call asking to reserve a large table that night for a birthday celebration. A joke, in very bad taste. I just say “You’re crazy” and hang up. Otherwise I feel very comfortable here. The Munich police are diligent and helpful. On Jewish holidays they send officers to keep an eye on the restaurant, to make sure there is no problem.’

Business is brisk, Yochi tells me. Next week they are catering for a large Jewish wedding (Munich’s Jewish community is 10,000-strong) and soon after that they will host a book launch for a (non-Jewish) author. She obviously relishes running the restaurant, ‘which has famous customers from around the world’, and shows me a photo of herself with Yoko Ono, taken during the latter’s visit years earlier.

The Cohens’ sons, Pascal and Herbert, both worked at the restaurant before deciding it wasn’t for them. Now they live abroad and are seeking their fortunes in other fields. So there will be no third generation to head the family business. ‘When Jacques and I are gone,’ Yochi states matter-of-factly, ‘the restaurant will die. But that is okay. Children must be free to choose their own lives, to do what they want to do.’

She doesn’t sound like any Jewish mother I’ve ever met.